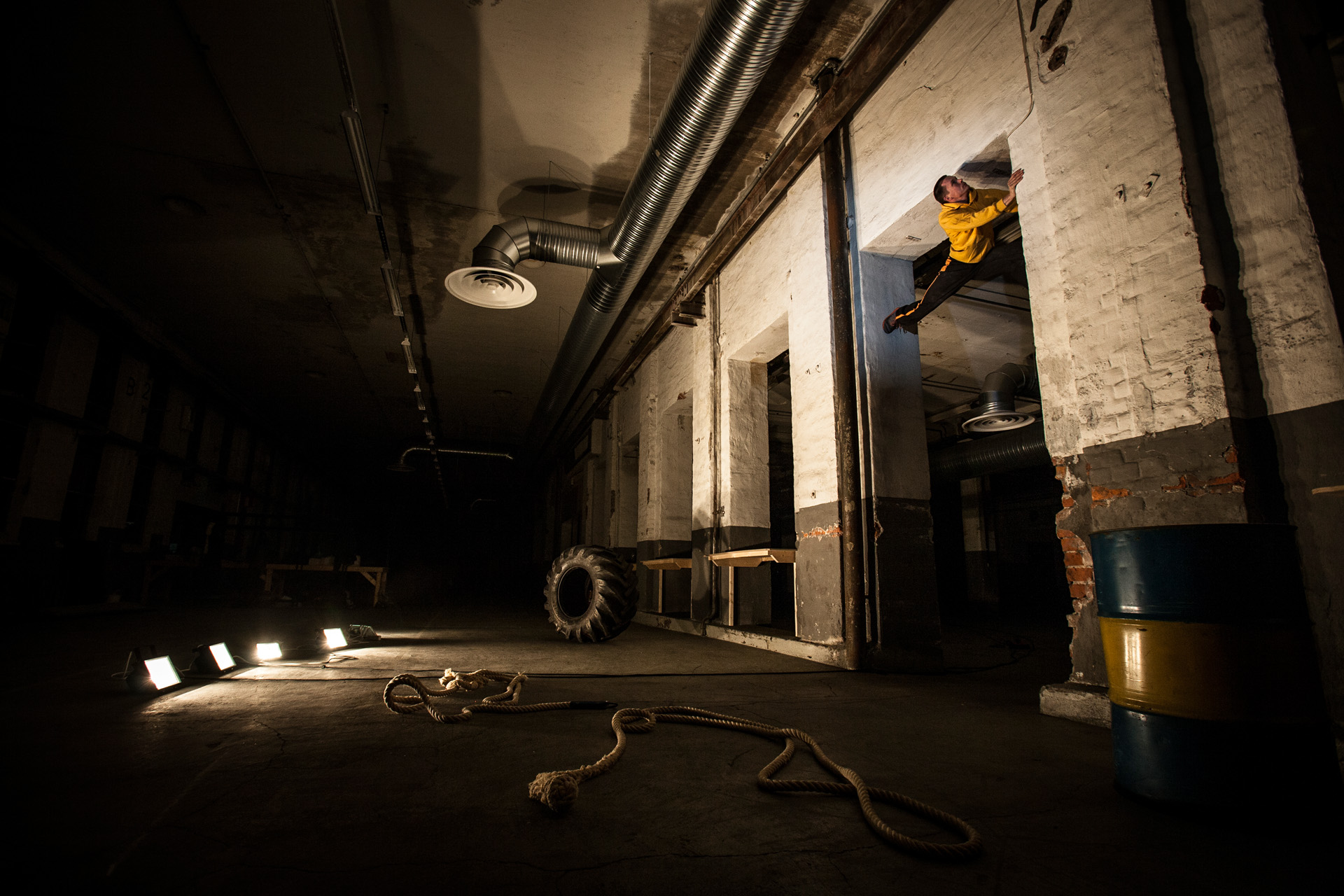 A Factory In Finland

If you ever get the opportunity to go and train in Finland, do not hesitate. Go.

In December last year I was invited to Jyväskylä in Finland to train, speak, and take photographs at the Finnish Parkour Association’s annual training event. This year it was entitled “The Most Apocalyptic Supreme Parkour Armageddon Nuclear Lightning Storm”. The Finns tend to have a rather unique sense of humour.

My good friend Perttu (aka Mr Spidey to more experienced readers) was keen for me to get some shots of some of Finland’s best athletes and, given the snow, it made sense to find an indoor location. The prospect of a derelict factory on the outskirts of the town seemed too good to be true. When Perttu told me, I asked him to find as much lighting as he could lay his hands on, packed my strobe kit and flew to Helsinki.

The factory is an old papermill and most of its innards had been ripped out and moved to China a few years ago. The shell remains and one of its huge rooms was transformed into the perfect venue for the training event – warm, dry and with plenty of space for a scaffold structure and a good selection of other obstacles. Before things kicked off, the space was mine to explore and photograph with Perrtu, Jarkko, Nikko, Monster, Juho and Juho from Parkour Akatemia.

Shooting indoors is not something I do very often and I was anticipating the possibility that a fair bit of improvisation was going to be required. Perttu had managed to dig out a handful of freestanding halogen work lamps which were bright enough to light the walls but no where near bright enough to freeze any action. I wasn’t sure how easy it would be to balance this light with my strobe and the first hour was spent experimenting with various lighting setups before I found something that worked. It was easy to flood the area with enough light but I was keen to try and keep the dark atmosphere of the factory’s huge spaces. About 6 years ago I made a snoot out of cereal boxes and gaffer tape and for the first time in my life it came in handy, allowing me to focus the strobe and avoid swamping the glow from the halogens.

Perttu was my first model, quite useful given that he understood that it would take me a while to get things set up. Once I’d figured out how to balance everything together (for the geeks: ISO500, f/5, 1/160, 5 halogens + Vivitar 285 at 4-5m with snoot + PocketWizards) finding the shot was relatively straight forward. Perttu had already spotted two huge hooks hanging from a mechanism on the ceiling and after playing around, we found a movement that allowed him to swing between them.

Now that I understood how it worked, transferring the lighting set up to the next shot was simple but we were starting to get pushed for time. Nikko was my next model and I was reluctant to change locations. Instead we grabbed some oil drums and a massive tractor tyre and set about building some obstacles. Pete McKee made a brief cameo and suddenly it was time to go and eat dinner.

Jarkko, one of Parkour Akatemia’s most senior coaches, was my next subject. Again short of time, it made sense to exhaust all of the opportunities inside this first room and I asked how he felt about doing some climbing. As the shot seemed to feel a bit empty I dragged along the ropes and barrels that had already served as filler and shoved the tractor tyre in at the back. The warm sidelight from the lamps was creating some really nice textures and this ended up being my favourite image from the entire shoot. We both had to put in a lot of effort to get the shot to work and I like the fact that Jarkko’s position doesn’t really make much sense.

The last shot of the day was with Monster. Time and availability of obstacles was now a concern so we built a tictac movement across some of the props that we had been dragging around. A little rushed but still a good result.

The following afternoon we returned to the factory. While the Finnish guys were busy assembling scaffold for the event, I spent an hour exploring deeper into the factory searching for ideas. Various parts of the vast complex were made a little more intimidating by the rumble of machinery (doing what, I have no idea) and there was the occasional sound of fast-flowing water from the diverted river that ran underneath the enormous building. I found what remained of a staff room; one of the few remaining partition walls was covered in postcards and pictures of half-naked women. These little details added to the tremendous sense of thrill as I explored, intensified by the noises and the fact that I was alone. I could have carried on for hours but I knew there were photos to be taken.

My final two models, Juho and Juho, were fantastic athletes, ready to improvise and take direction despite having little experience of being photographed.

Looking back, it was a fantastic opportunity to do something new, both in terms of location and technique. Little work was required in post-production and contrast of the cold light of the strobe with the warm glow of the halogen lamps was not as severe as I had initially feared and was easily balanced in Adobe Camera Raw.

Being a perfectionist, there are a ton of things I would go back and do differently but time, pressure and resources are often determining factors. I’m proud of the way we all worked under unique and challenging circumstances. You can find the gallery here.

My thanks to Perttu, Ville and all of the Finnish traceurs. And a shout out to Pete McKee, Martin and Marcus from Denmark, and Chau and Yann of the Yamak.