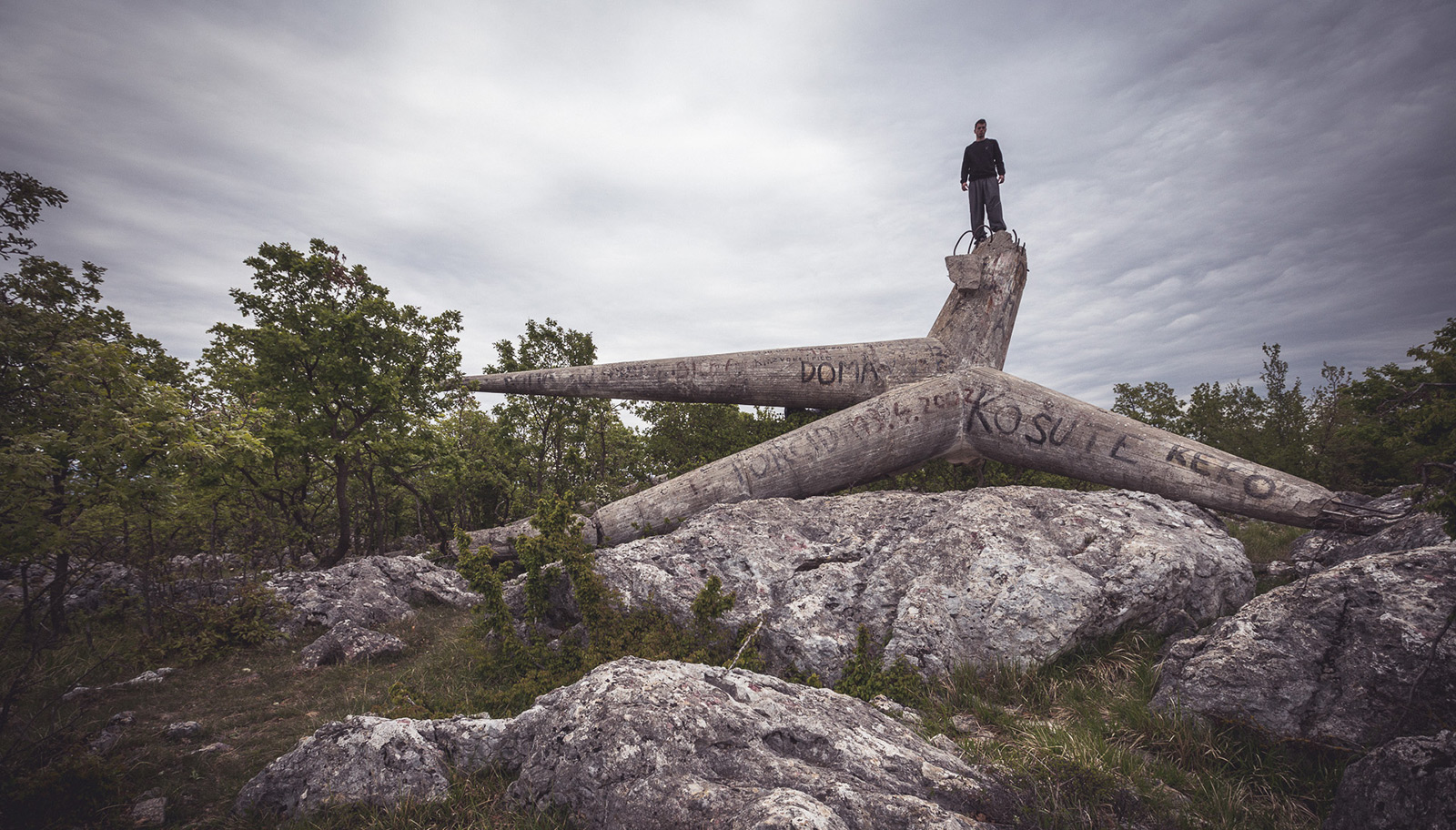 Arriving in Croatia brought us within reach of Sasa’s family home on the outskirts of Zadar, a source of much-needed rest after four days, seven countries, and more than three thousand kilometres of driving. However, before we could relax, there were three more monuments. Two would be found on the Adriatic coast: Makarska, a small city overlooking the ocean, and Podgora, just to the south; the third was Košute, further north and inland.

On the coast, the contrast couldn’t be greater. That morning, we’d hiked through snow to discover Makljen, a graffiti-strewn ruin atop a mountain; in the afternoon, we were sweating through our t-shirts exploring a pristine white monument surrounded by a manicured garden, all a short walk from the stunning, sandy seafront. Part monument, part observatory, the site has been renovated in the last ten years after having fallen into disrepair during the 1990s. Joined by Vijekoslav and Matej, two traceurs visiting from Zagreb, we climbed and explored the white walls of Makarska’s monument as they sat bathed in golden-hour sunshine. 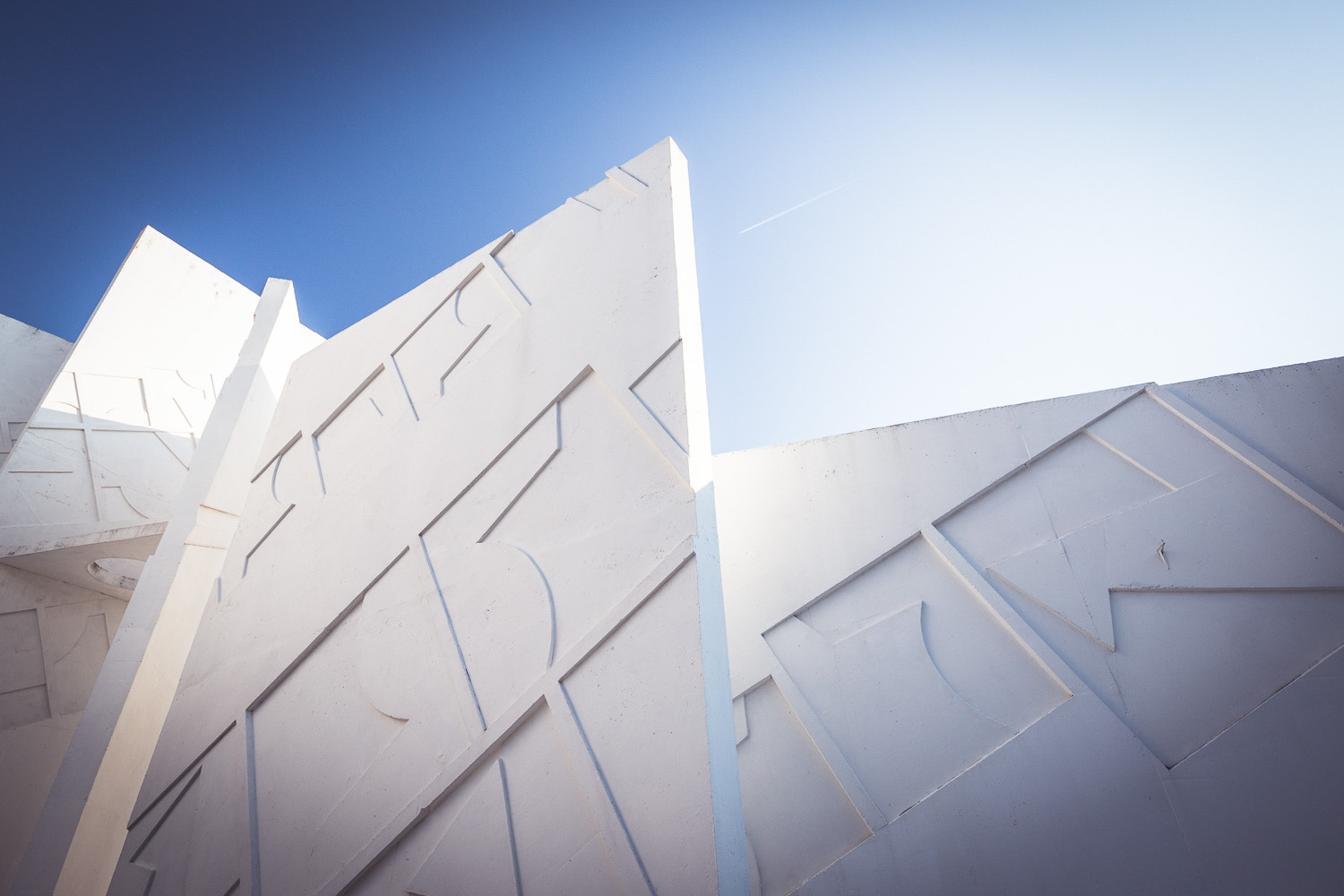 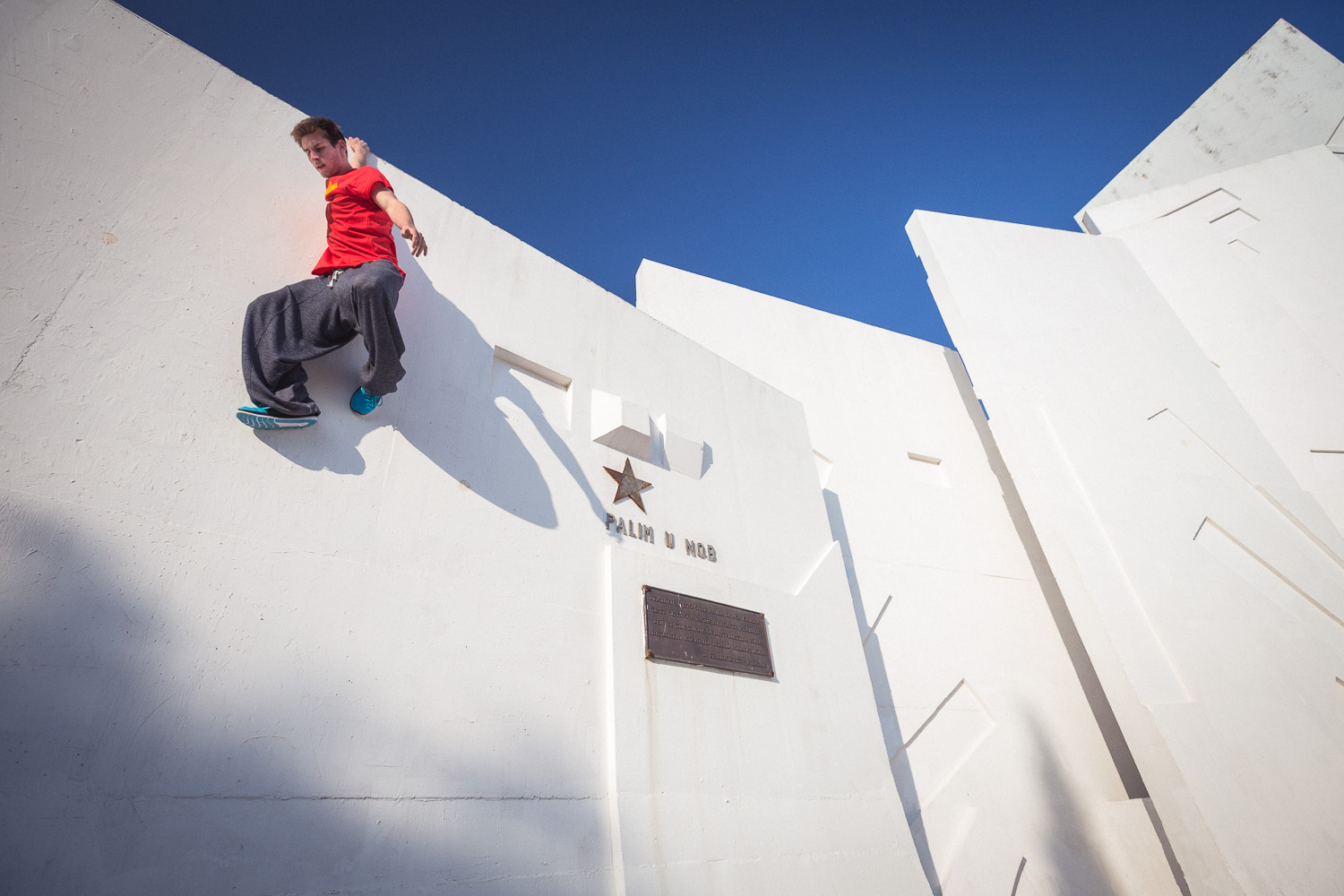 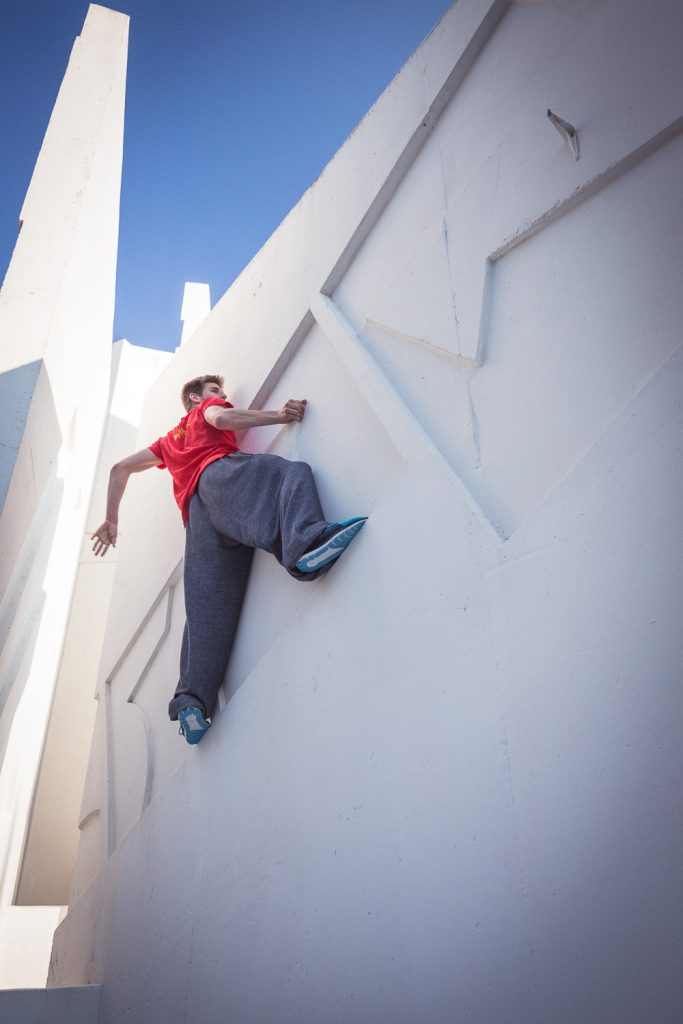 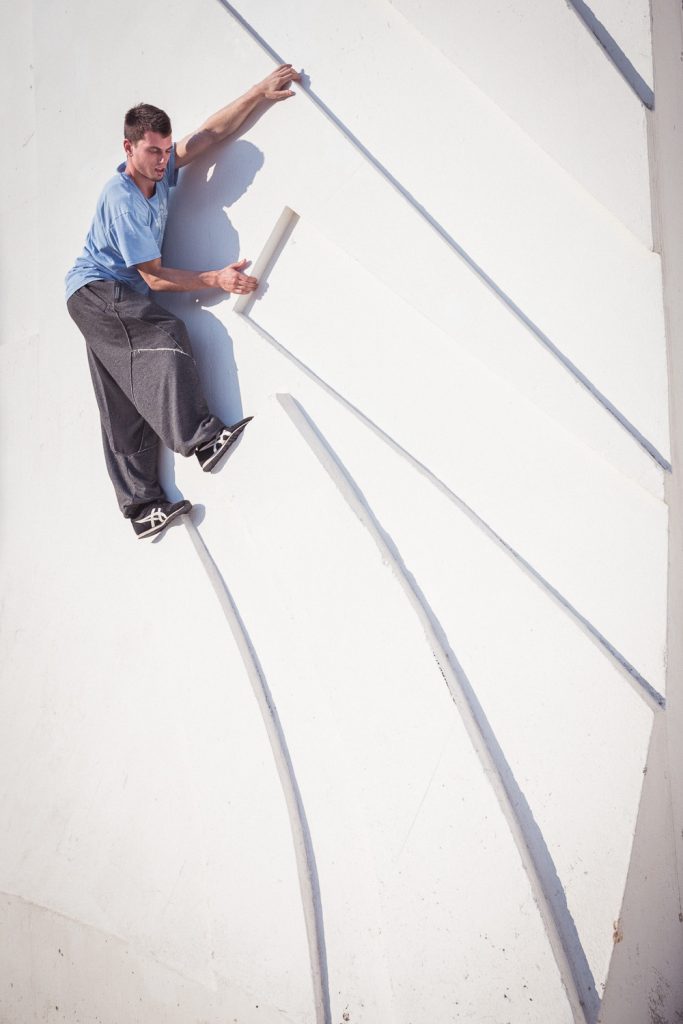 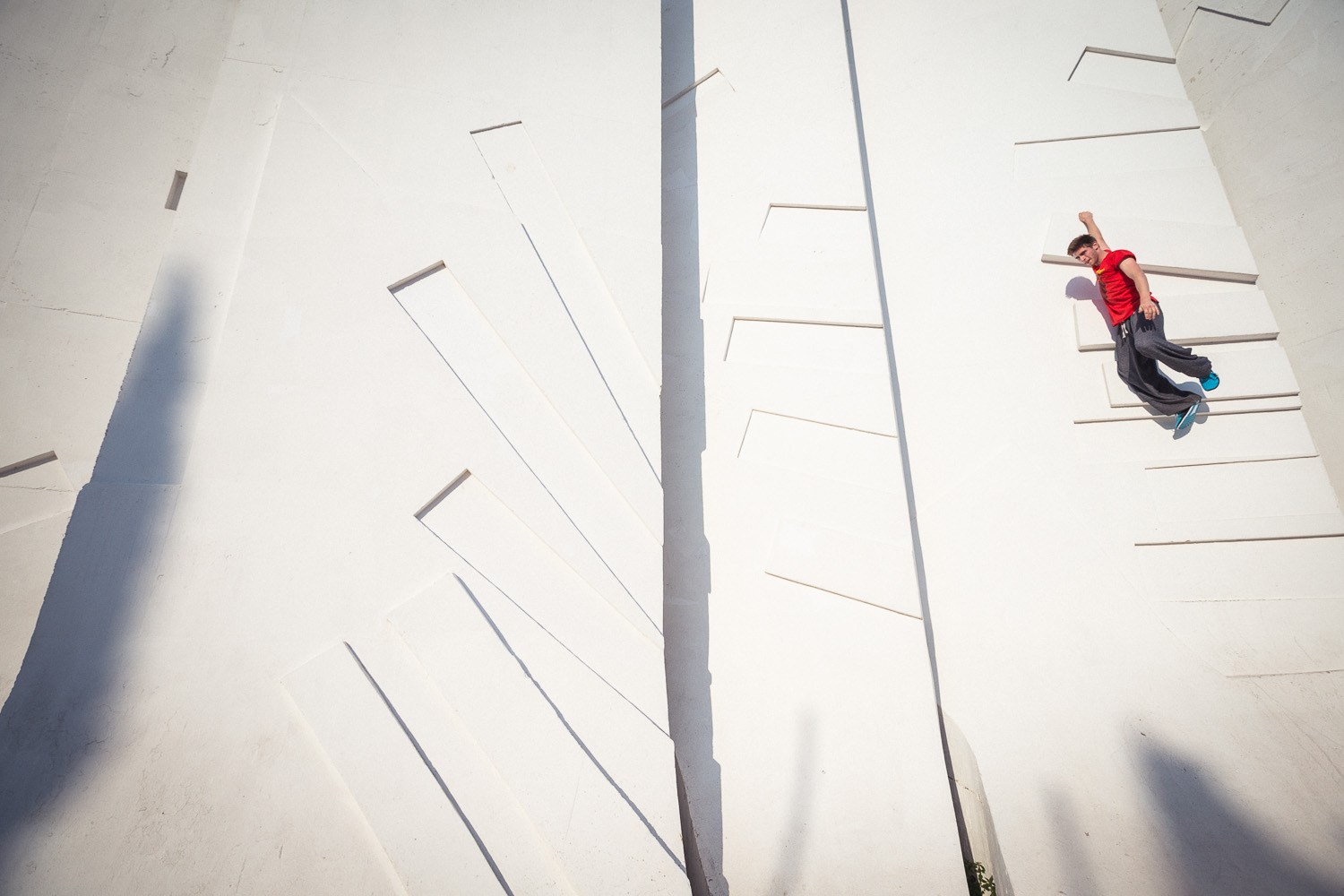 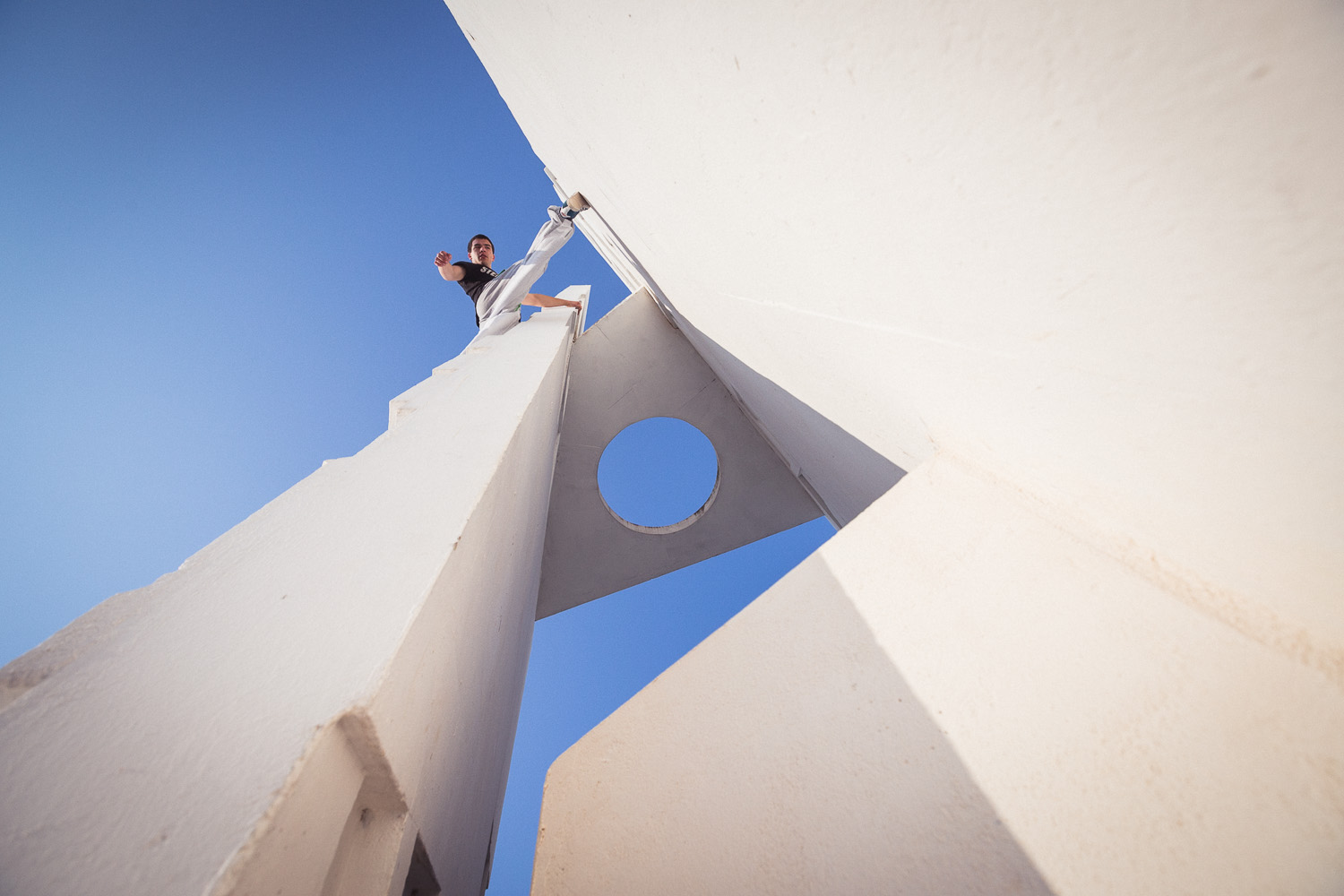 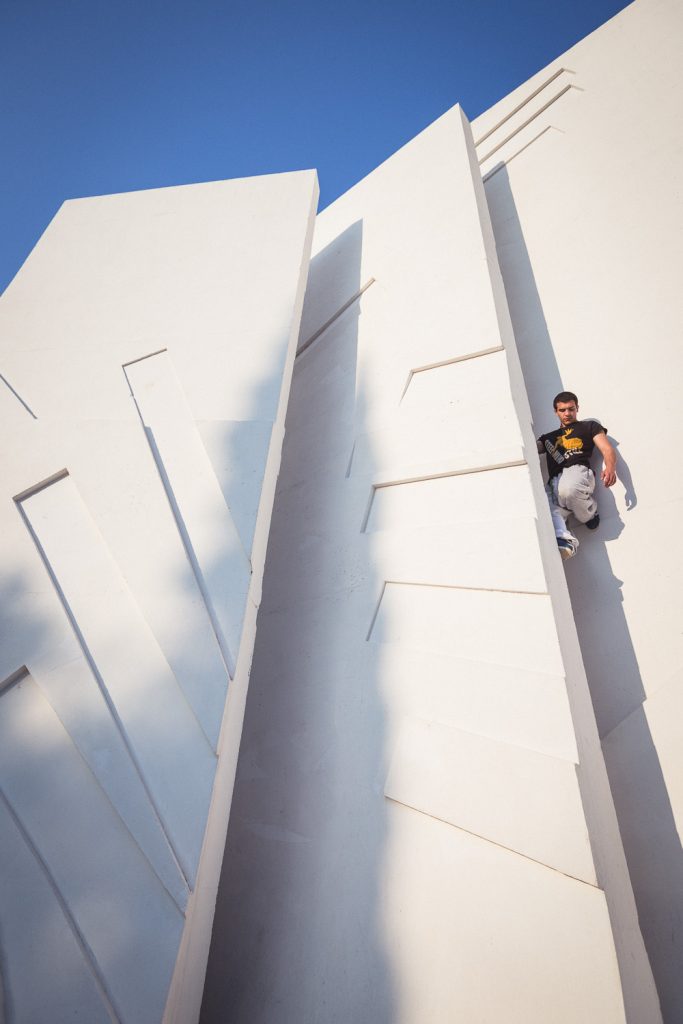 The following morning led us to Podgora; like Makarska, it is home to a monument that celebrates the efforts of the improvised navy that resisted the Axis and evaded the blockades imposed by the Nazis and their collaborators during the Second World War. The Seagull Wings Monument is in magnificent condition, despite rumours of attempts to destroy it with dynamite during the 1990s. 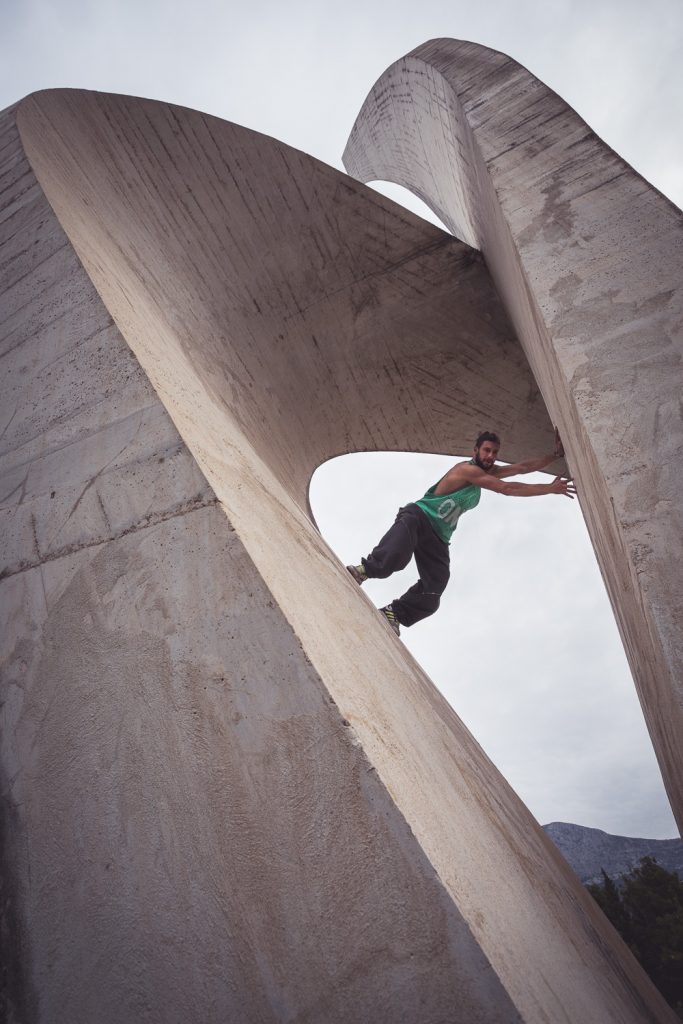 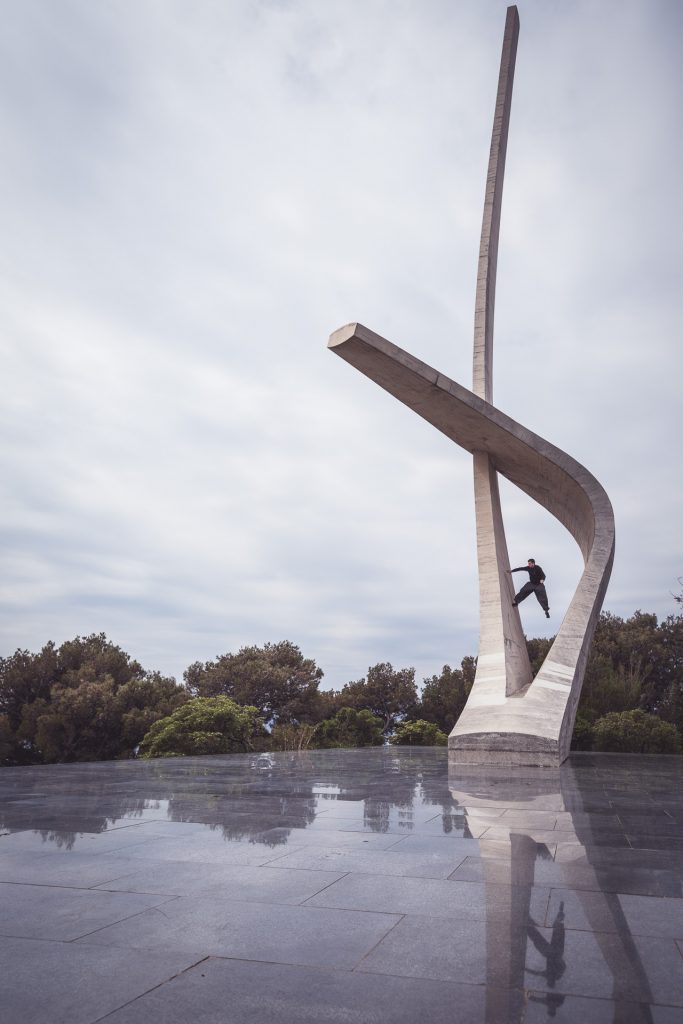 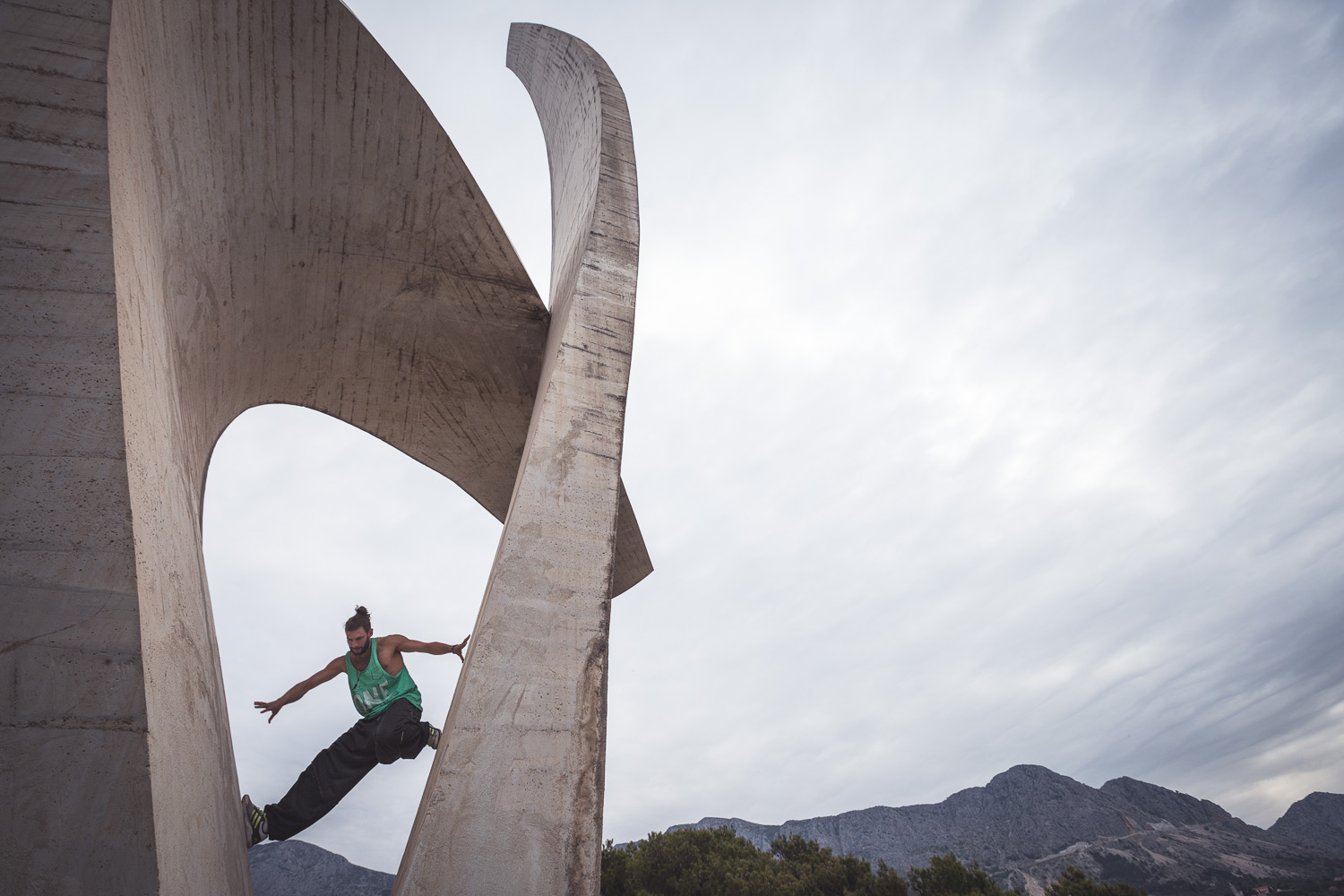 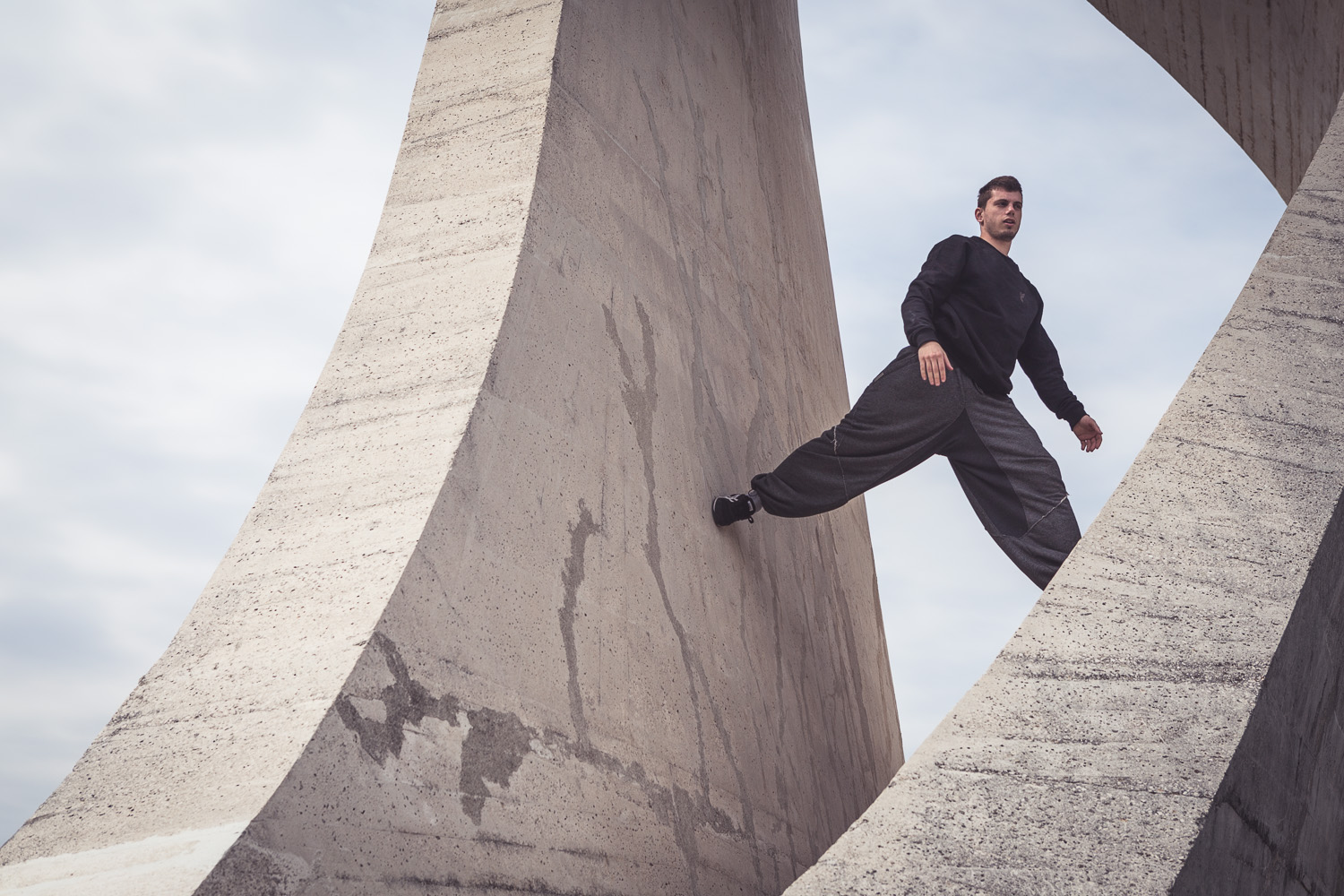 Heading north, the afternoon returned us to remote destruction. What is left of the Monument to the 1st Split Partisan Detachment sits above Košute, a quiet and unremarkable village in a quiet and unremarkable part of Croatia. We parked next to a basketball hoop in the village square and began following the path that led up a steep hill and away from the farms and houses. As we passed through a small orchard, we were joined by a large, friendly black dog that seemed keen to accompany us on our journey. 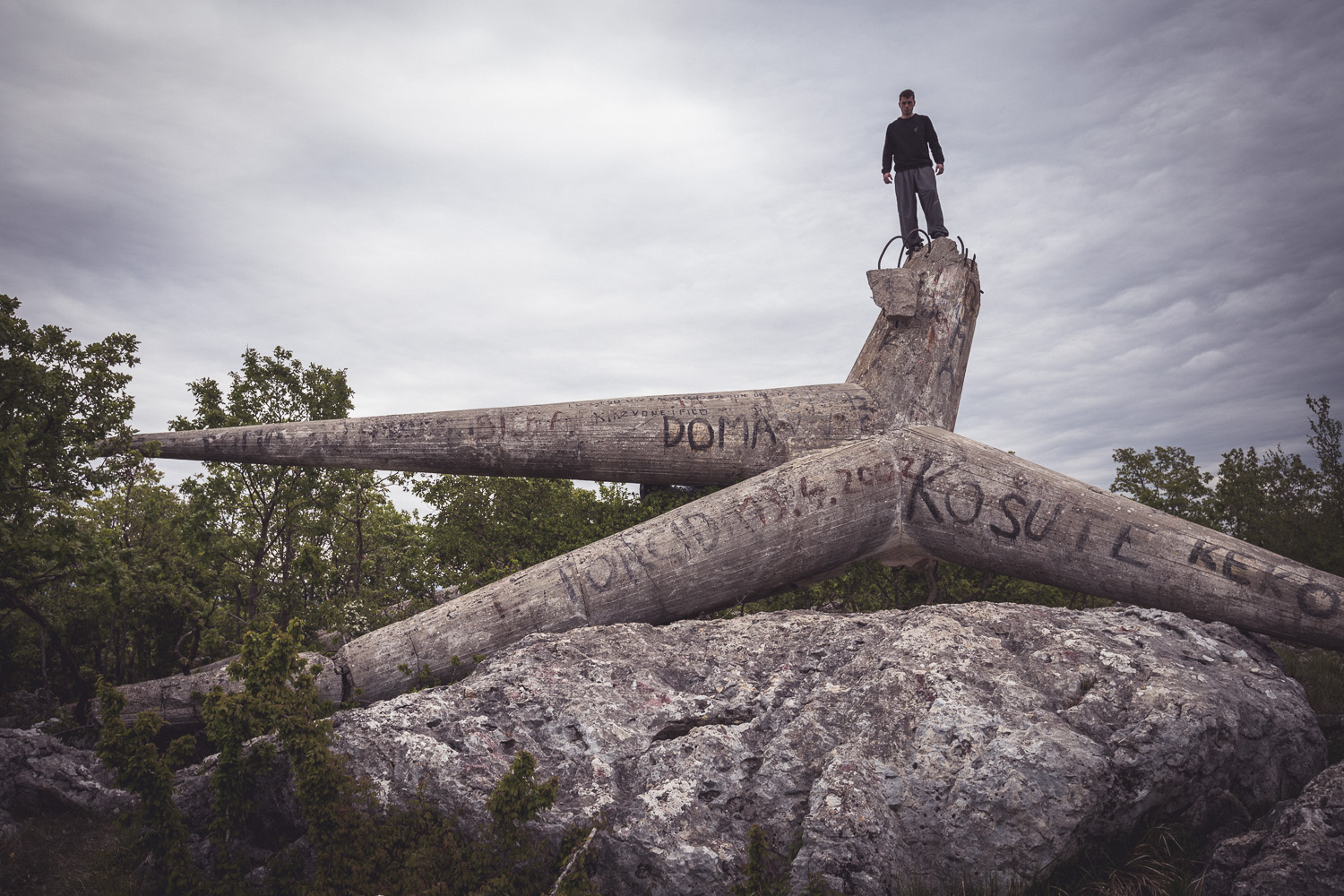 An uncomfortable atmosphere hangs over the ruins of Košute. Originally almost 20 metres tall, it now sits in pieces, laden with graffiti, in amongst bushes and brambles that were once kept at bay. Not long after we arrived, a handful young men passed by, dragging a pit bull on a chain and, we assume, taking advantage of the secluded location to indulge in whatever substances they’d brought with them. They eyed us as they passed, and our dog snarled angrily at theirs, everyone happy to keep at a distance. After half an hour, they made their way back to the village but this time, perhaps thanks to the substances, the tacitly agreed distance was now ignored, and the pit bull was no longer on its chain.

I’ve never watched two dogs try and kill each other before. They rolled amongst the rocks and the broken concrete, tearing into each other’s flesh. Blood flowed as our friendly black dog fought bravely and we watched helplessly. After a few minutes, each dog had a cruel hold of the other; the pit bull firmly attached to the black dog’s belly, the black dog with a vicious grip of pit bull’s neck and ear. Quite how they eventually separated, I’m not sure. The pit bull was returned to its chain and dragged away, and the black dog quickly disappeared to lick its numerous wounds. The young men mentioned something about how the two dogs had been staring each other down for some months and hauled their bleeding pit bull back towards the village.

This encounter seemed completely in keeping with the location. Violence marking violence marking violence, all futile and driven by longstanding animosities, still unresolved. A few hours’ drive away, the monument at Makarska hosts school groups, star gazing and alien autopsies for kids; here, the monument is in pieces, slowly disappearing into the undergrowth, covered in graffiti, and now also the blood of two dogs who tore chunks of flesh from one other for no apparent reason. The monuments were intended to represent peace, unity, and sacrifice. Instead, Košute is broken and stained with violence. 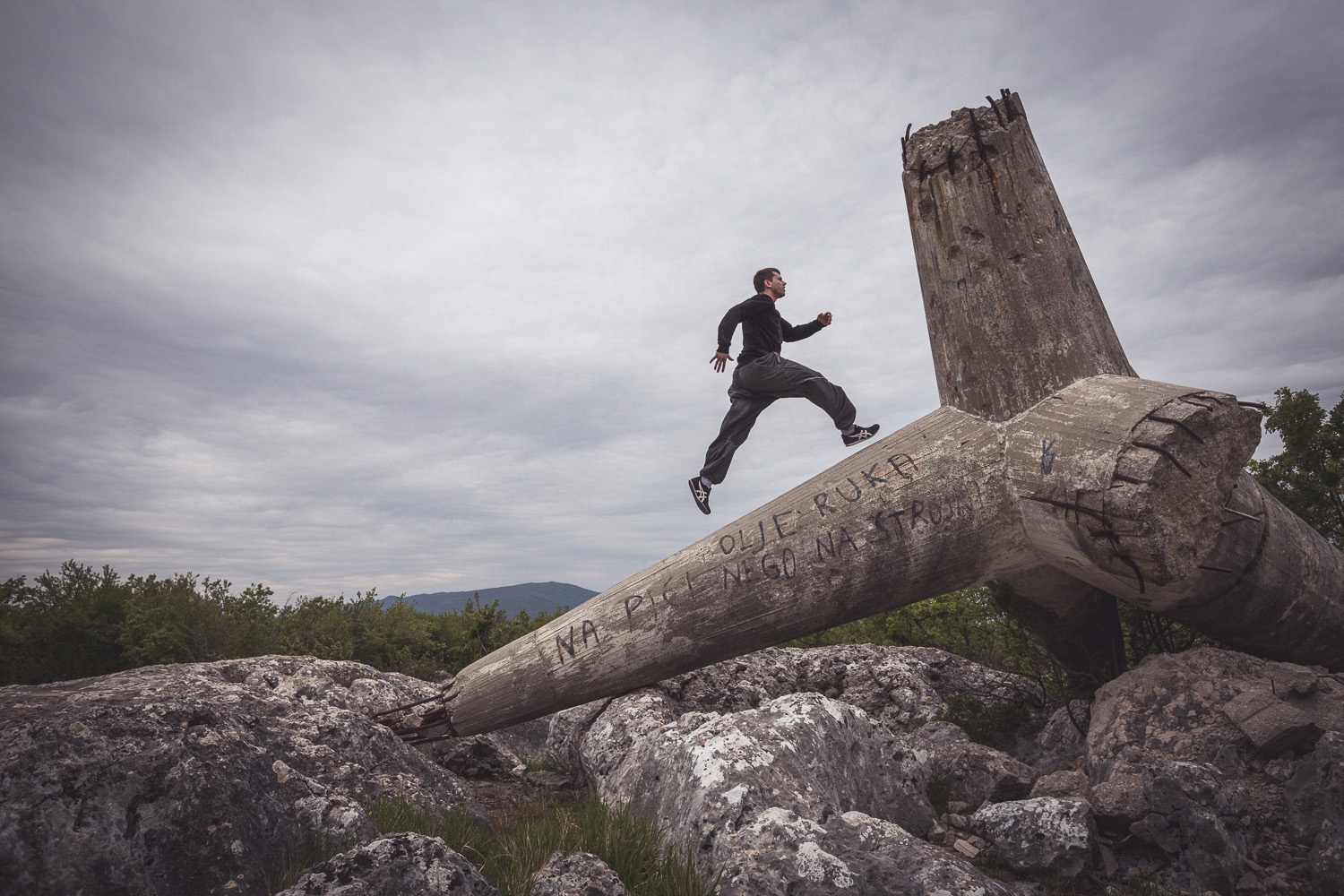 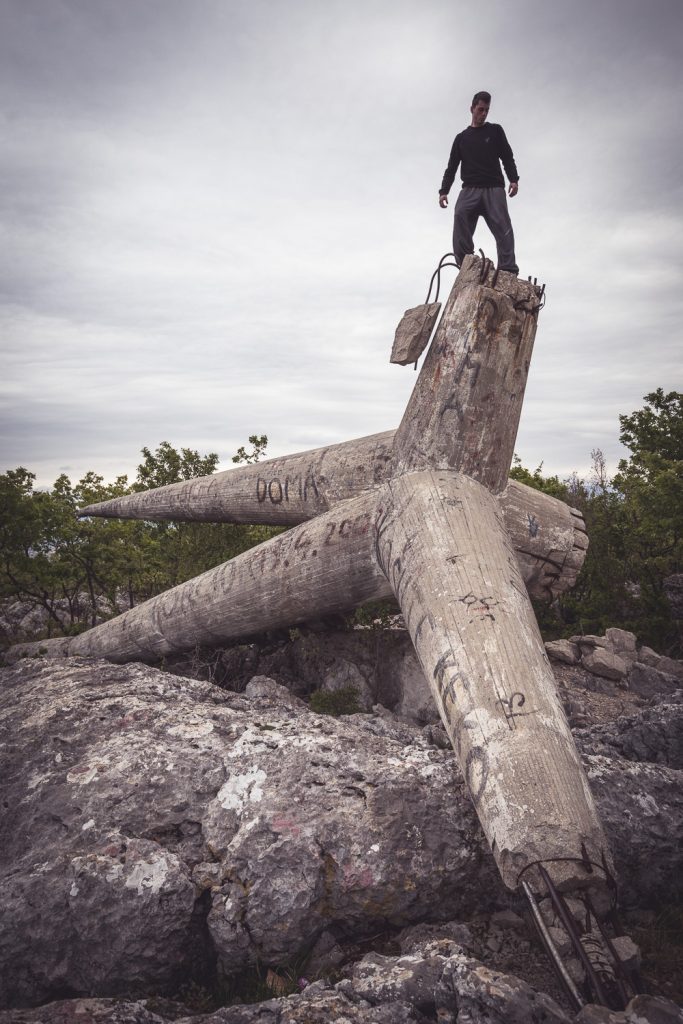