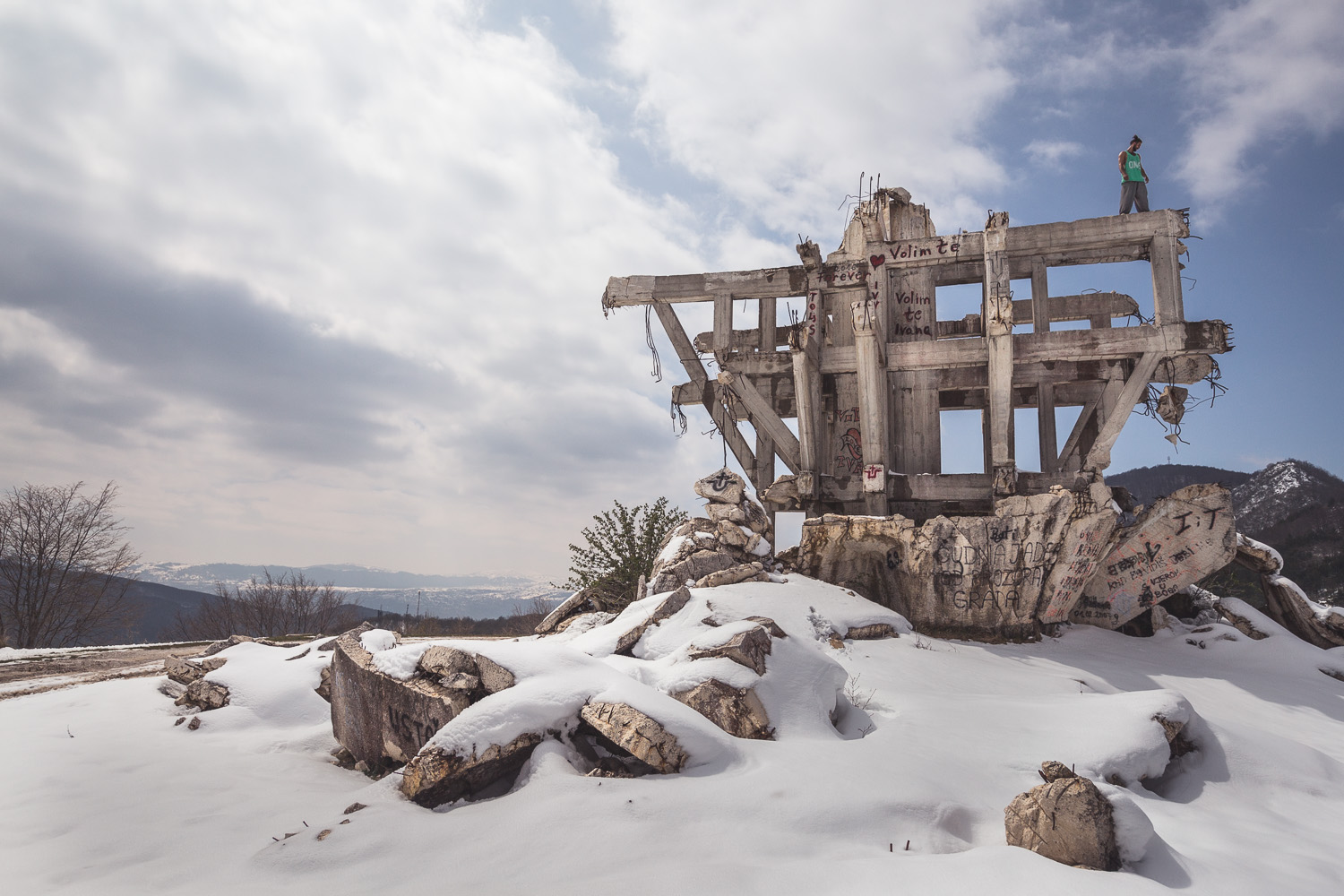 From Tjentiste, we made the most of the roads that wound and swept through the Bosnian hills and spent the night in Mostar, a city whose history is endless. Sadly, the morning gave us only enough time for a quick wander across its infamous bridge and a coffee before continuing on our journey.

After a few hours of stunning scenery, we arrived at Makljen — or what remains of it. All of these monuments bear the heavy weight of history, not just of the events that they memorialise, but of what has happened since. Makljen wears these passing years like no other, standing naked and broken atop a Bosnian mountain, and waiting patiently — perhaps indefinitely — to see if it will be restored or razed completely. 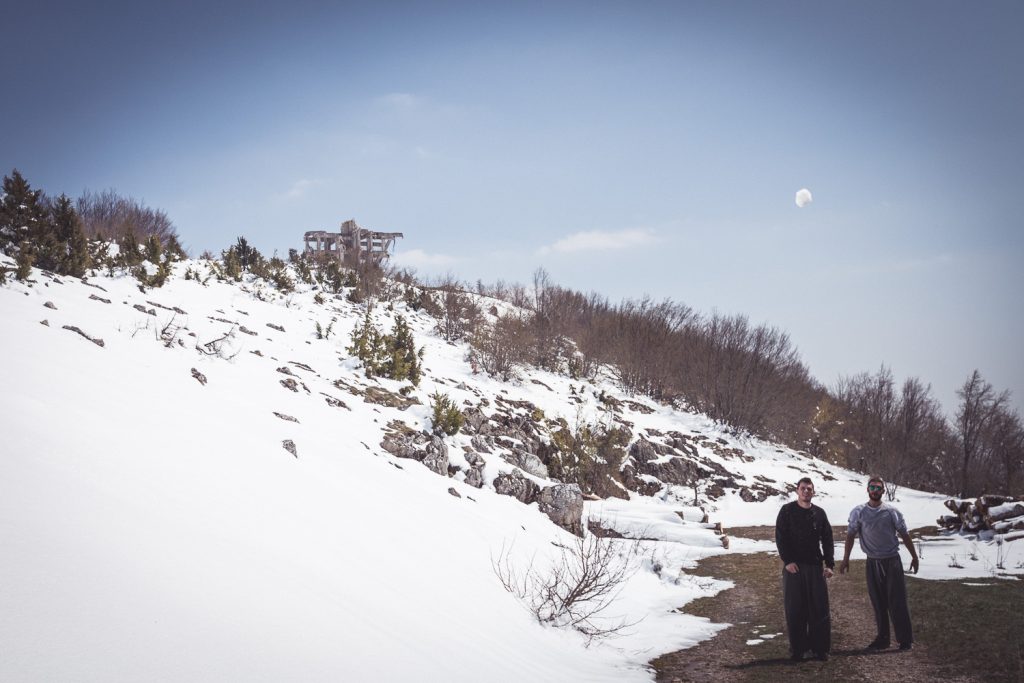 Following the wars of the 1990s, it fell into disrepair, happily dilapidating until it was subjected to anonymous dynamite in November 2000. Since then, it has sat with uncertainty while the rest of Former Yugoslavia pretends that it doesn’t exist. Amongst its broken bones and shattered shell, it wears fascist graffiti — a sure indication that any intervention here would be problematic. Monuments reflect and reveal politics, and Makljen is no exception.

Kosta and I explored, making laps of the structure. Sasa disappeared, returning with the car. Inexplicably and with great glee, he created a set of muddy tyre tracks around the monument and destroyed the pristine snow. I was unimpressed. 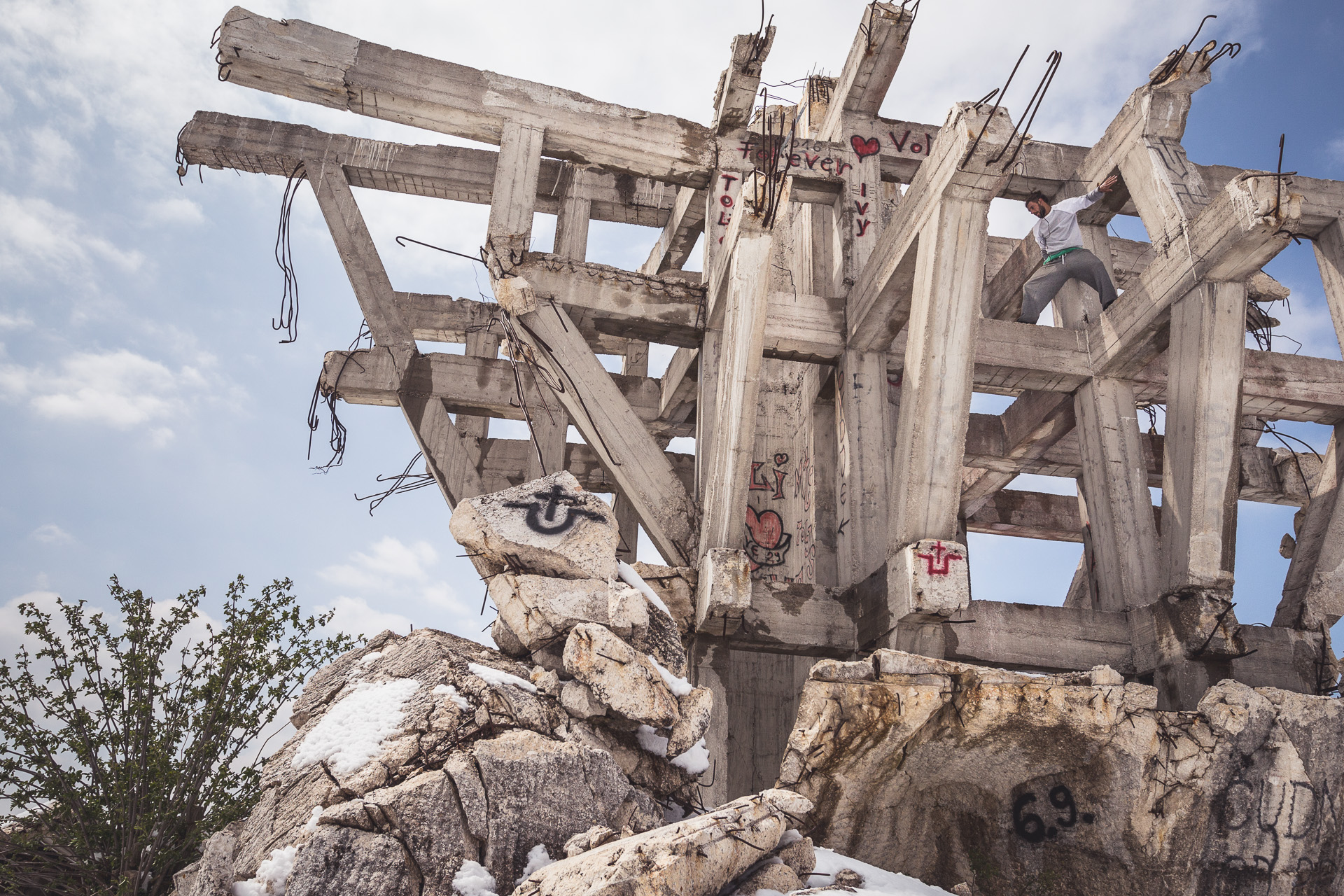 Sheep arrived. A gentleman with a stick paid us no heed as he herded his flock across the snowy mountaintop. Sheep departed. Apart from the fact that it’s a giant concrete ruin on top of a mountain and placed a short distance from the road, it feels as though the monument isn’t there. There is nothing to give it context or explanation: no signs, no brochures, and Google Maps has only six reviews with an overall rating of 2.8 stars out of a possible 5. The criteria of its reviewers are unclear. 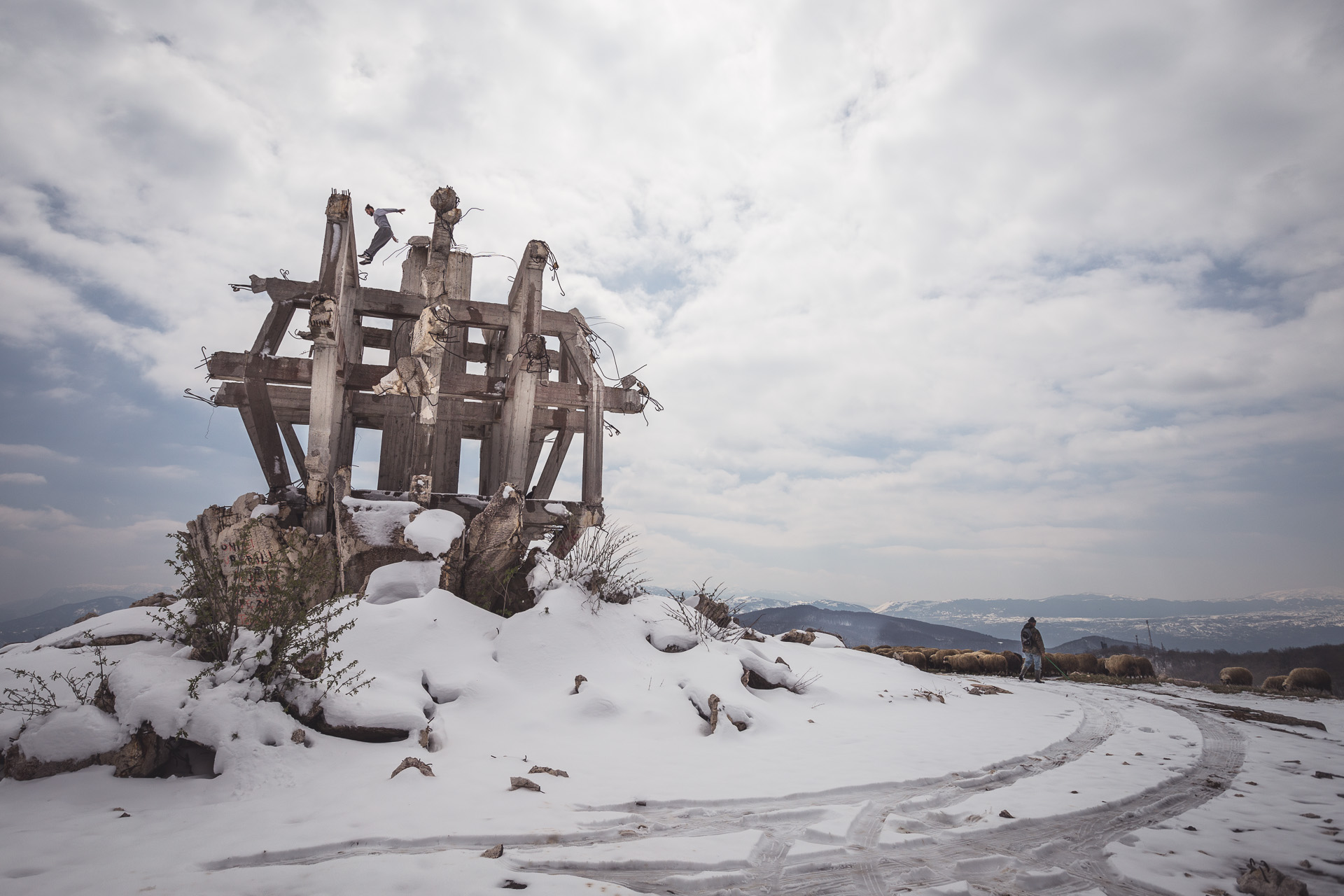 The monument feels both ashamed and defiant; its skeleton is laid bare, the concrete casing that was once its abstract aesthetics now lie as scattered chunks, partially buried in snow, at its base. But importantly, the monument is still there, still a part of the landscape, a scarred scar that defies both explosives and time. For now.

The drive through Bosnia was again spectacular. Lakes and mountains flashed by, crossing snow-laden plains and carving our way west, one country eventually giving way to another. As we waited to cross the border into Croatia (our seventh country in four days), we knew that three guys, two beards, and a car with Serbian plates meant that a search would be inevitable. What I had forgotten, however, was that my bag contained a large, plastic water bottle full of my urine. Let me explain.

Our hotel in Mostar was a family’s home, and the journey from our bedroom to the bathroom involved going through another bedroom, along the hallway, down the stairs, along another hallway, through the lounge, and then through the kitchen. On the road, it’s easy to get dehydrated and I’d drunk a load of water that evening. Anticipating a full bladder in the early hours, I opted to fill an empty water bottle rather than make the long trek through the cold, dark house. Not wanting to parade my fluids in front of our hosts over breakfast the following morning, I packed the bottle into my bag and promptly forgot about it until a Croatian border guard pulled it out of my rucksack. Looking back, I could have passed this off as rakija, the popular Balkan moonshine. The beauty of hindsight. Instead, I awkwardly put the bottle into the large wheelie bin next to the table where our luggage was being inspected.

Ahead, the sun shone and the white walls of Makarska awaited. Weirdly, this border crossing feels like a huge step out of eastern Europe, not necessarily into western Europe as such, but there’s definitely a different atmosphere in Croatia. There’s a hint of wealth that makes the wilderness feel that little bit less wild, which is both reassuring and a little bit disappointing, as though the geography knew that the end of our adventure was coming into sight. What it didn’t know is that we were only a few days from watching two huge dogs try and rip each other apart in the hills above a village in the middle of nowhere. The journey was definitely not over.