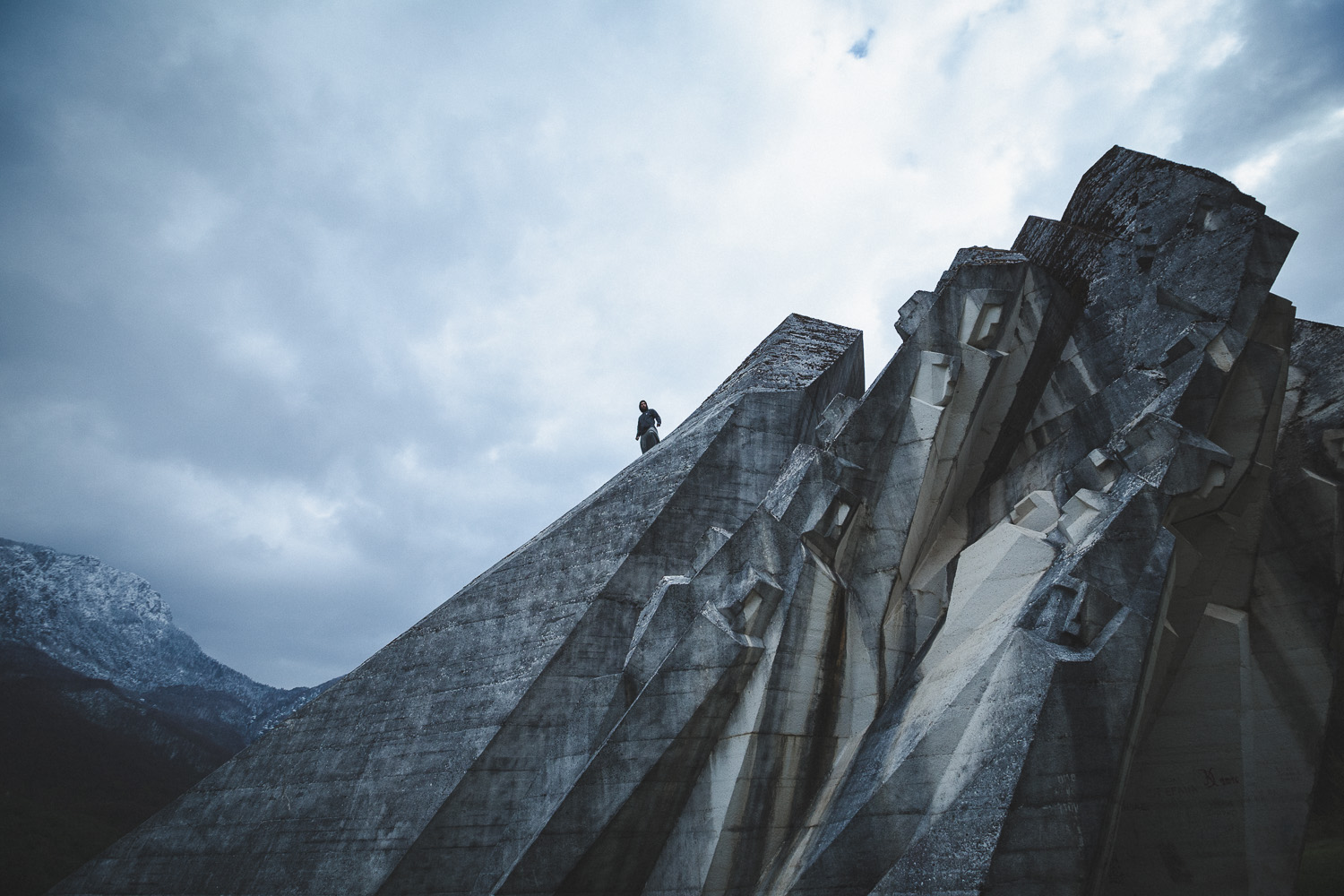 Prints of the photographs published in this article are available here.

With roadtrips, there’s a limit to the amount of planning that you can do. You draw up a rough schedule and then throw the dice in the air. In the Balkans, the number of sides on those dice increases exponentially. Suddenly you are subject to the whims of Montenegrin police officers, painfully slow border crossings that apparently open and close at random, herds of sheep that fill the road and move according to their own schedule, and no idea what the next corner will bring. 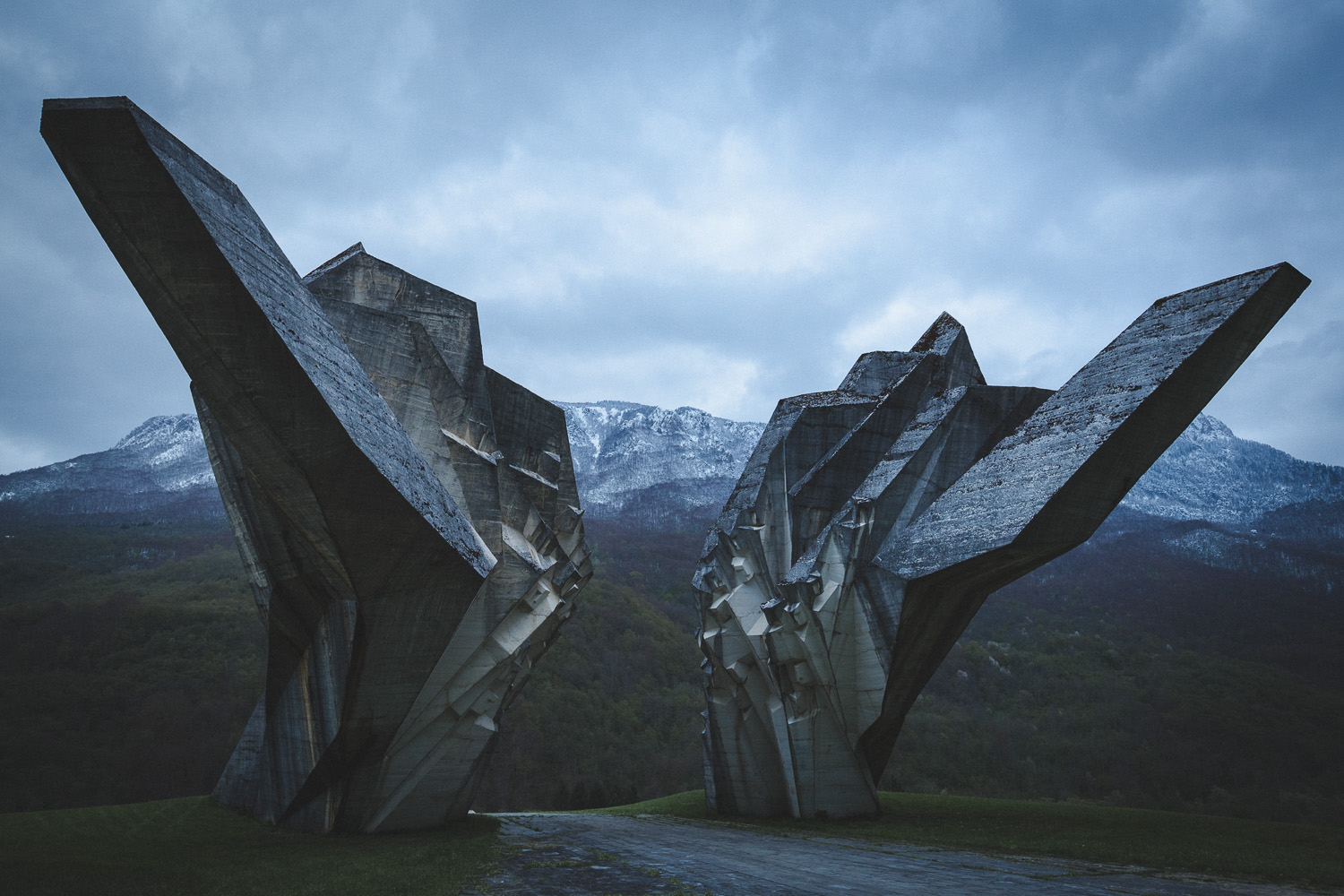 Bosnia and Herzegovina is almost beyond words. This small, stunningly beautiful country is crippled by a violent past, still struggling with the hangover of too many wars that are now very much a part of its everyday politics. There’s a sense that it is never too far from chaos, and everything – its economy, its people, its infrastructure – suffers as a result.

Driving through BiH, it can feel as though every other car is a Mark II Volkswagen Golf, but this wasn’t what stood out as we weaved our way through the mountains. Instead, the landscape took our breaths and we drove in near silence, staring up at the cliffs that rose above us on both sides. Trees clung on in improbable places, and tunnels swallowed us whole to then spit us out a little closer to the final monument of day three: Tjentište, deep inside the Sutjeska National Park.

More than 3,000 soldiers lie buried beneath Tjentište, fewer than half of those that died in 1943 fighting the Nazis at the Battle of Sutjeska. Effectively, those soldiers gave their lives so that Josip Broz Tito, soon to be Yugoslavia’s president, could escape and continue the resistance. The mountains provided a hiding place and gave the country its future, and, given the number that perished and the importance of this battle, the scale of the monument here is no surprise. 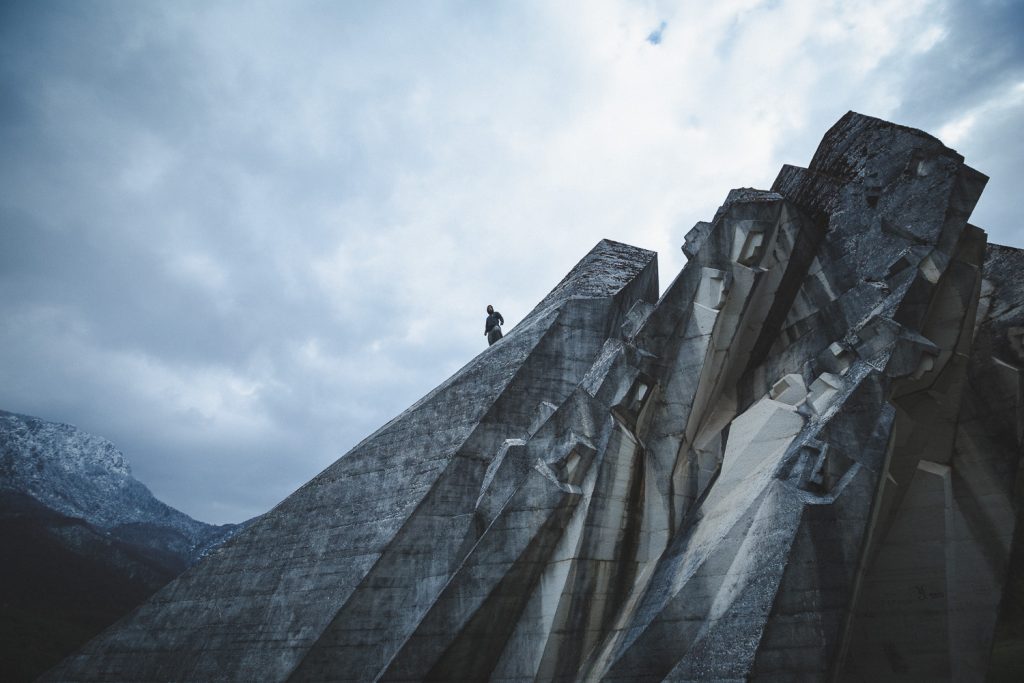 The monolith that stands halfway up the mountain is the most beautiful concrete structure ever created. The remoteness of the location is not unusual for the Yugoslav monuments; many mark sites of battles, uprisings and executions and, in the years following their construction, they were often sites of pilgrimage for some, or completely ignored by others (as discussed previously, for many people living in the Balkans, World War Two was not simply a case of good versus evil).

Landscapes hold power. National pride and identity are bound up in forests, rivers and mountains, connecting people to a country’s history, and allowing a sense of honour in the beauty and resources contained within a nation’s borders. The monuments tap into this power, borrowing from it, and investing back into it. Tjentište, as if its appearance were not enough, is a remarkable structure in a remarkable location, and almost feels a part of the mountain despite being man’s imposition upon it. Once kept meticulously clean, its white walls are now weathered and wear a layer of lichen, and nature slowly shifts the balance between what was built and what was built upon. 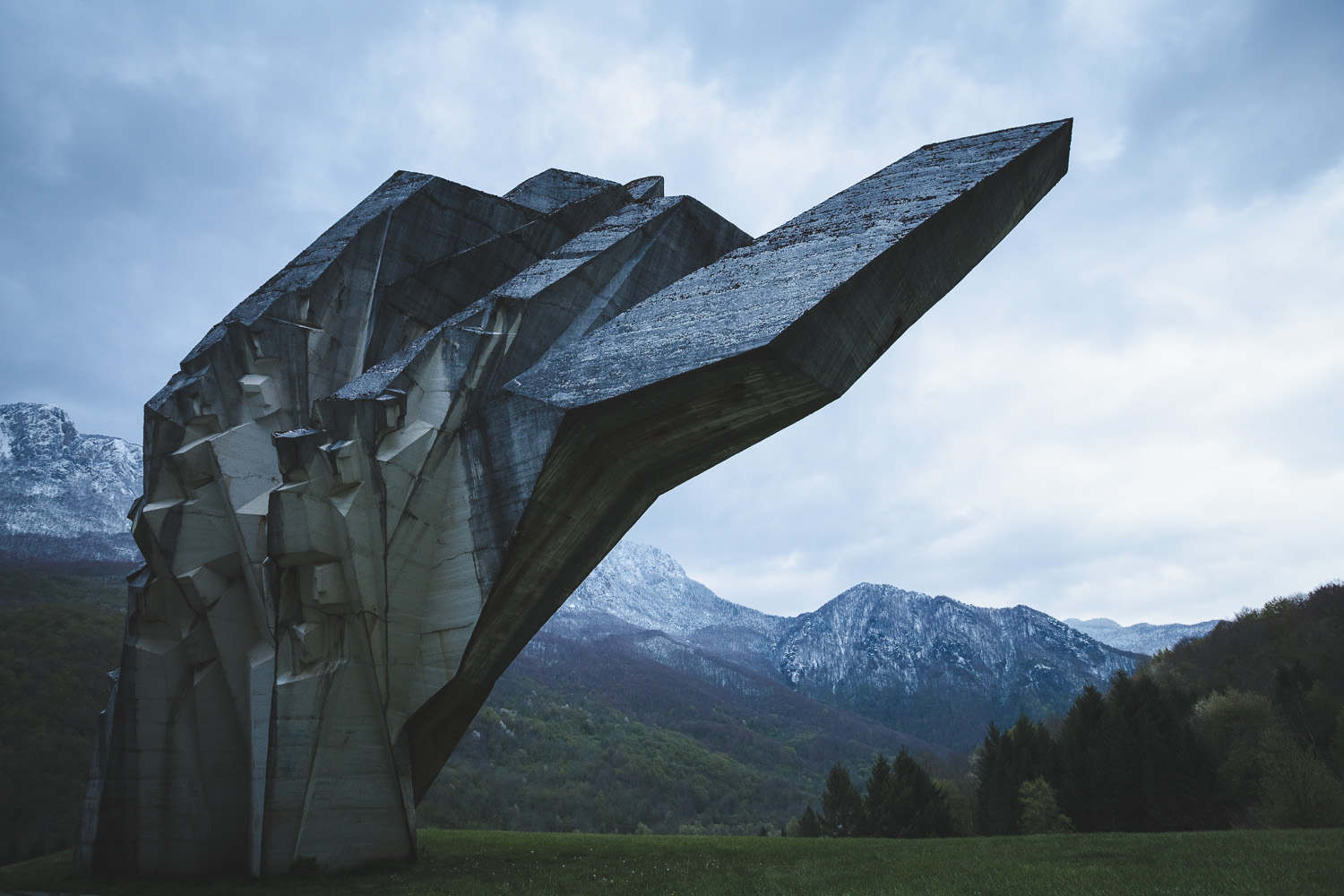 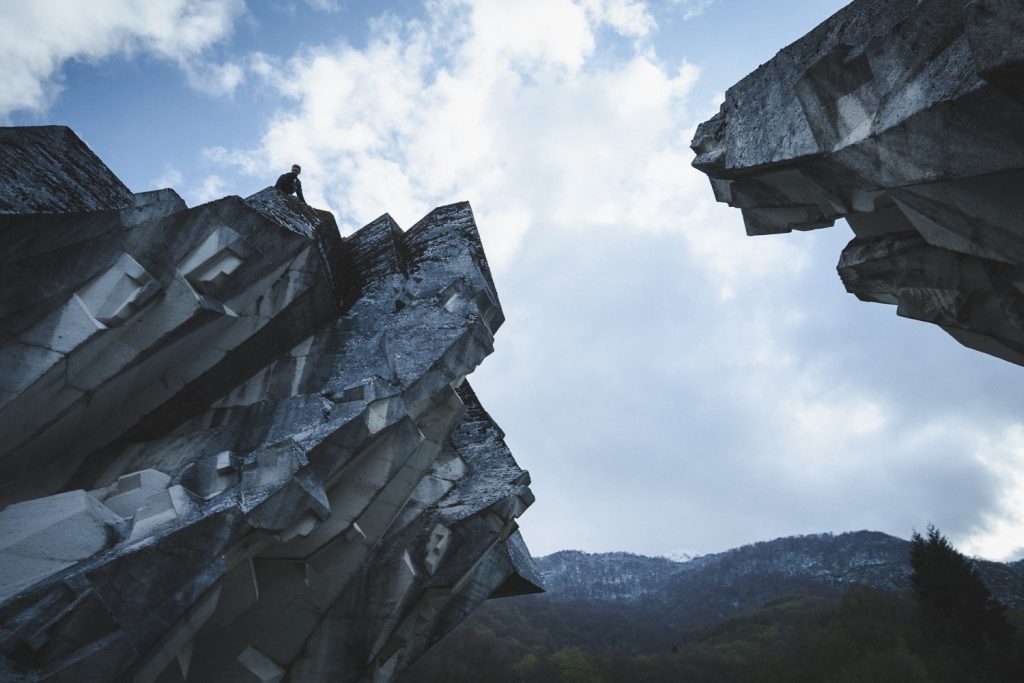 I had dreamed of visiting this monument. I dream of going back. For a few hours, we wandered, climbed, but mostly stared at the structure and its surroundings. Part of each wing was easily climbed, but accessing the upper sections was almost impossible. Kosta was dispatched back down the hill to the car to bring first jackets (it was cold and getting colder), and then the rope that had proved critical at Ulcinj. In the end, the structure was too high, our rope too short, but that didn’t stop Sasa and Kosta struggling awkwardly up onto one of the higher sections, terrified by the prospect of then having to get back down again.

As the light faded, we knew that we still had a long drive ahead of us. We had a choice between Mostar and Sarajevo, with no real time to explore either. As we wandered down the hill, a large, scary-looking black dog came to check what we were up to, proving incredibly friendly and providing the only other living creature we had encountered that entire afternoon. The days of bus-loads of tourists coming to pay tribute at Tjentiste are long gone. Instead, it keeps a solitary existence, watched only by the snowy peaks across the valley and sought out every now and then by curious souls such as ourselves. 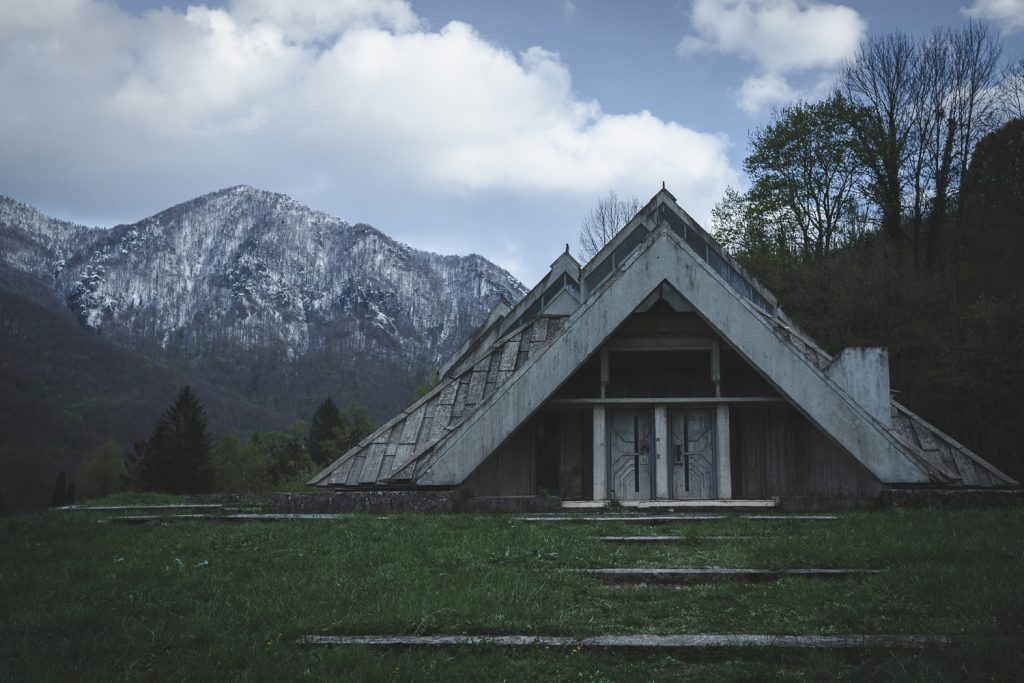 You can buy archival quality prints of these photographs by clicking here.