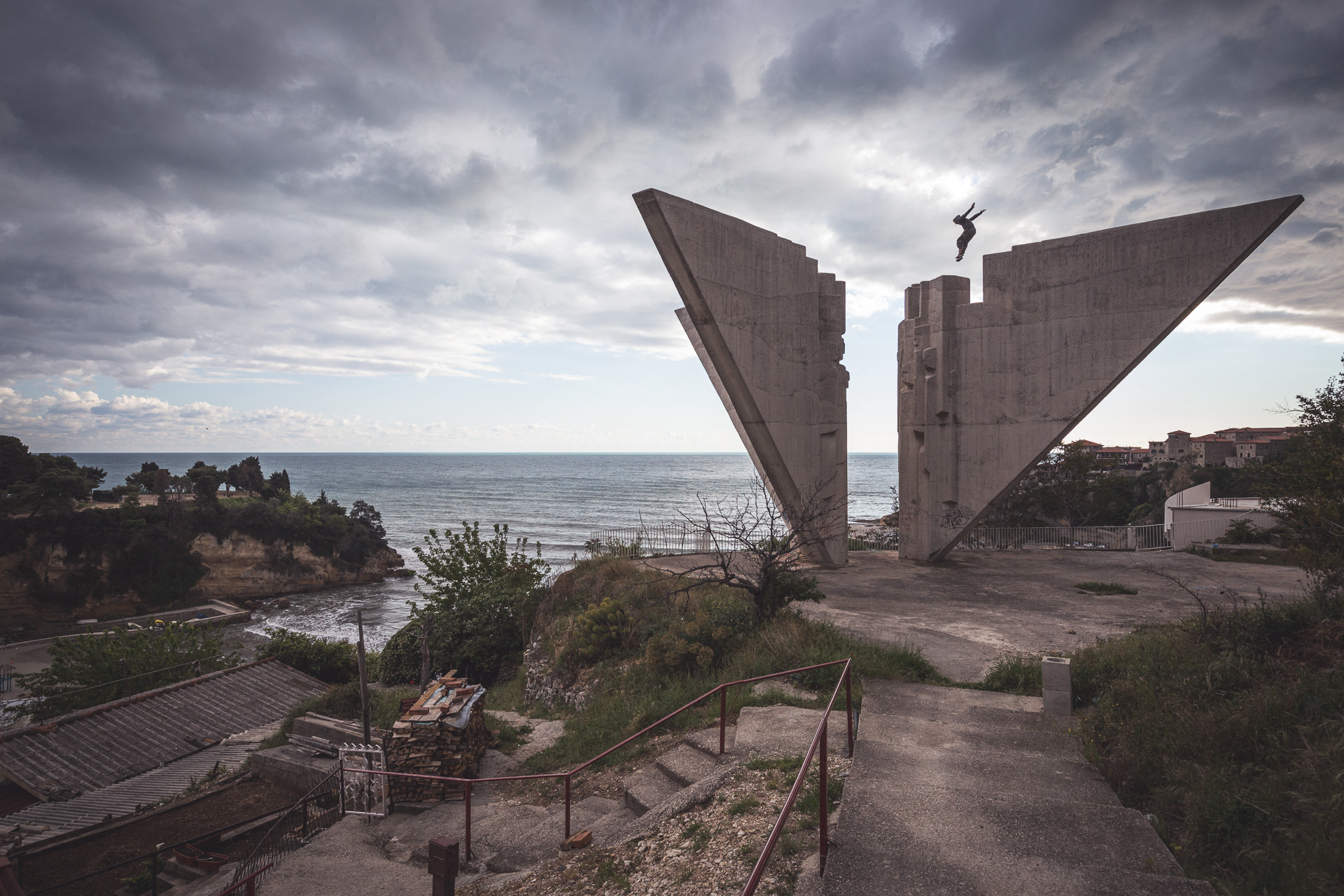 Day two. Sasa was limping. The failed jump on day one of our road trip had left him in a lot of pain. This stopped him from sleeping but, fortunately, not from driving. At 6am, we set off from Skopje, a little apprehensive about what a journey through Kosovo would bring.

Even those with the scantest knowledge of global politics will know that relations between Serbia and Kosovo are complex. There’s a general sense that it wouldn’t require much to trigger a descent into another violent conflict.

With so much history contributing to this situation, it’s difficult to write anything, as anything written is a reductive simplification, inevitably doing an injustice to one side or another, or missing the infinite complexity buried inside any single piece of information. Let me say only this: during the existence of Yugoslavia, tensions were suppressed; there were no ethnic, religious or regional identities – everyone was Yugoslav, united under the (comparatively benevolent) regime of Marshal Tito. With Yugoslavia’s collapse, this changed, leading to the emergence of six – or arguably seven – countries, some of whom are still a hair’s breadth from being at war with one another.

Invariably, the region’s history shapes every traceur’s identity, but parkour creates a mindset of openness and exploration, causing us to see international borders as opportunities rather than points of division. Parkour people from Former Yugoslavia are not separate from their country’s past, but they do have an attitude that allows them to look to the future, rather than being trapped by history. Being part of the global parkour community means being connected with an amorphous, fragmented but digitally interconnected network of like-minded people, all of whom love to train and go on adventures together, with no concern for ethnicity, religion or nationality. ‘Otherness’ is something to be explored and embraced, rather than feared. 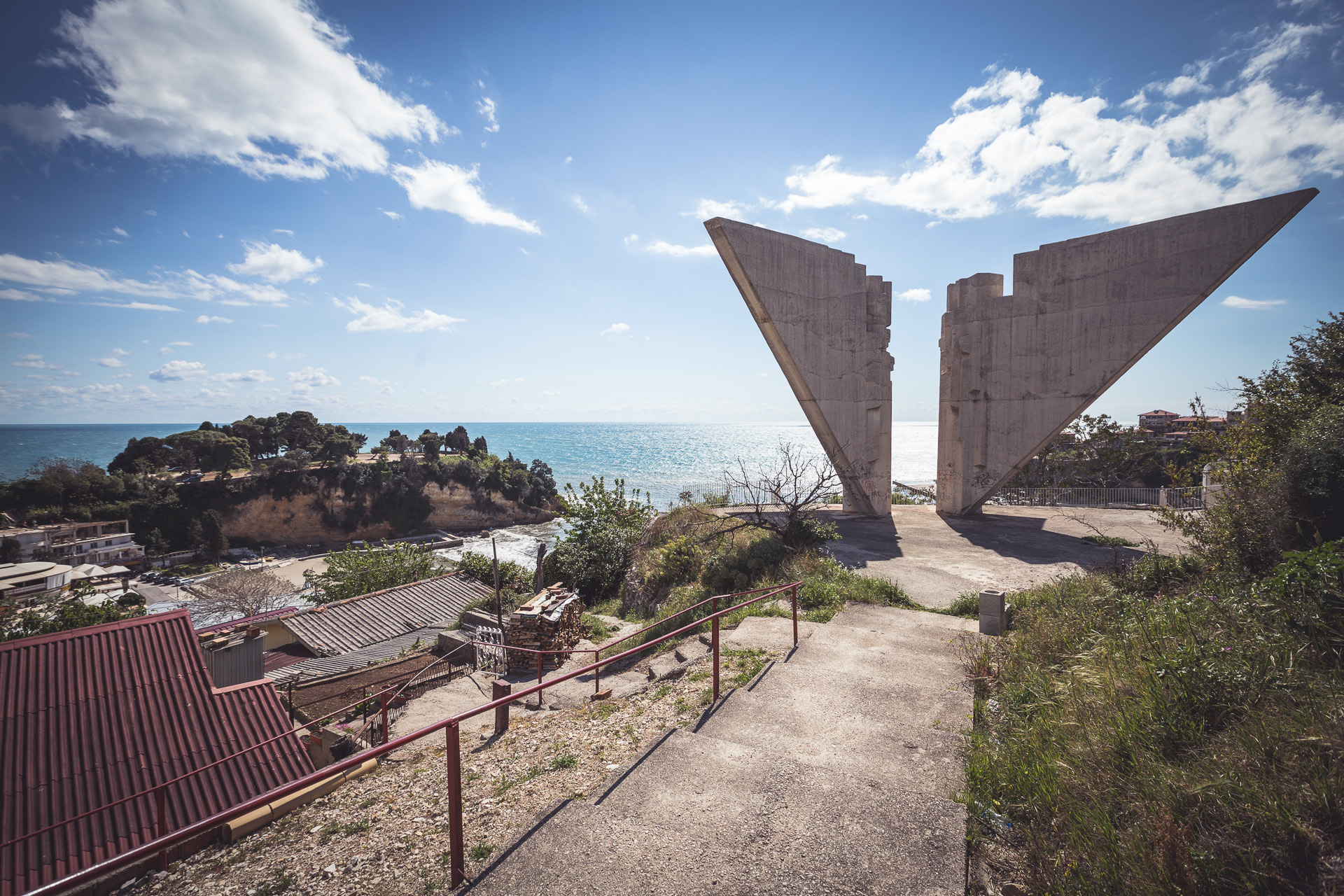 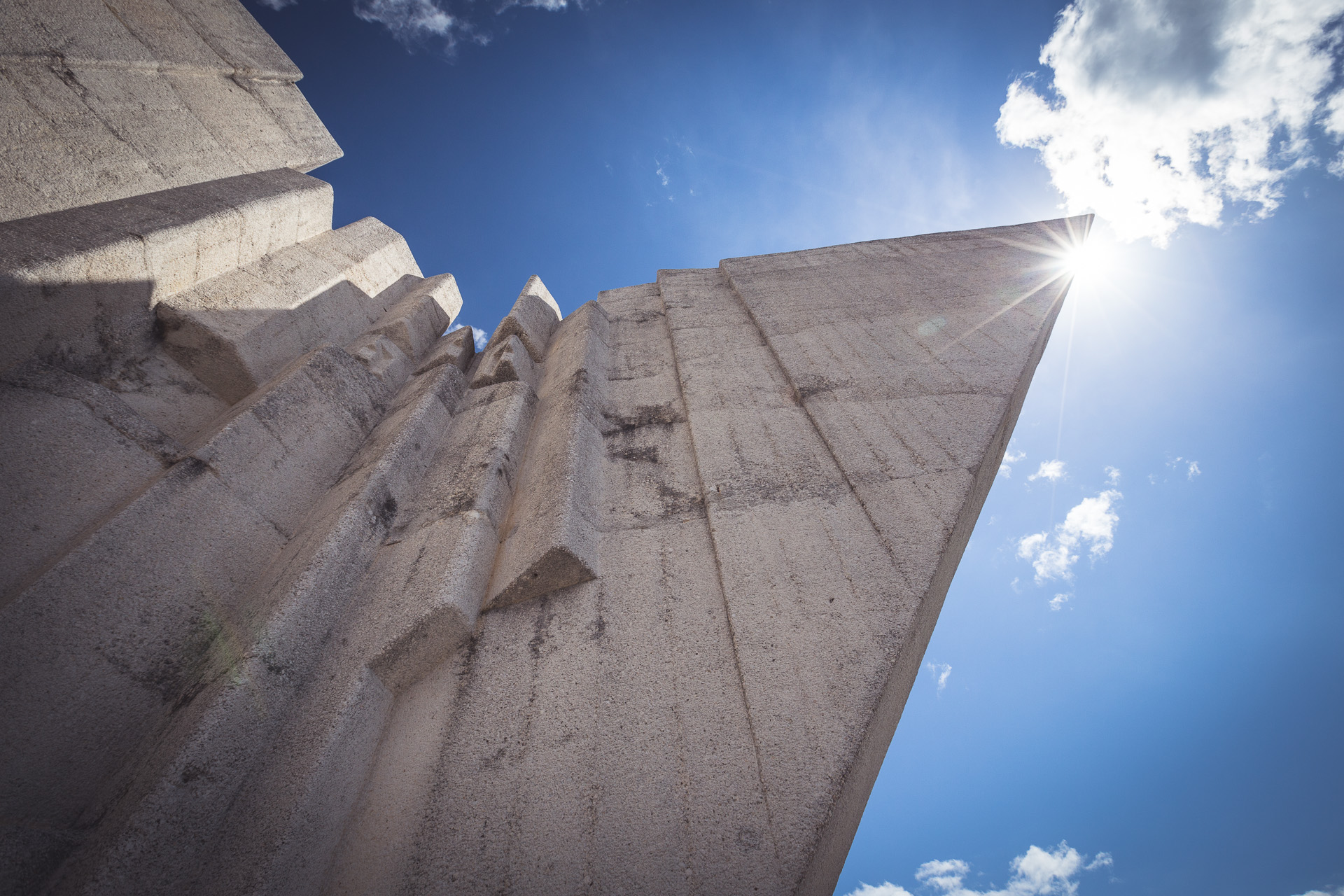 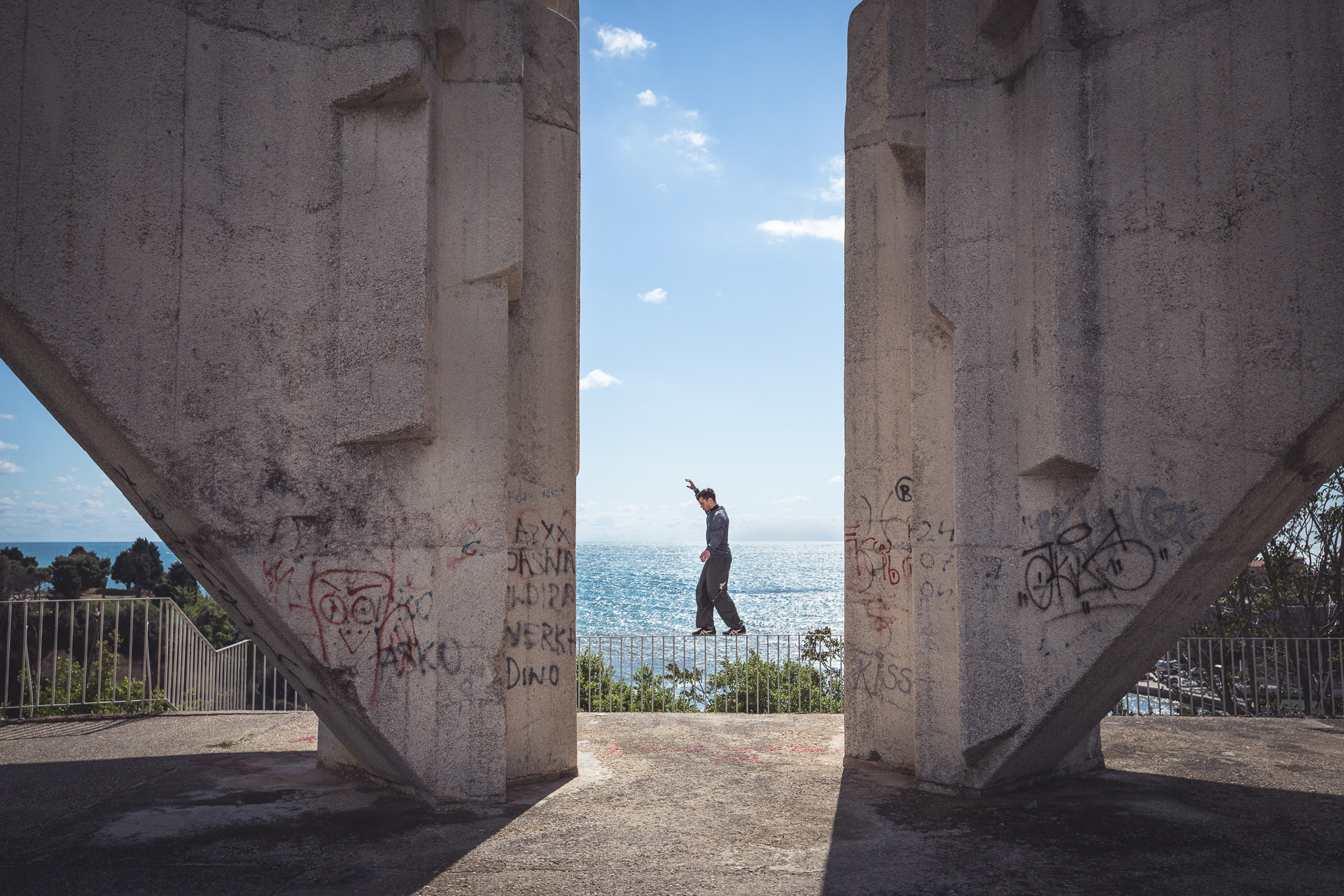 During the months of preparation for our journey across the Balkans, we knew that crossing the border between Kosovo and Serbia would be problematic. Fortunately, the locations of our chosen monuments meant a route that avoided this border, taking us into Kosovo from Macedonia, and from Kosovo into Albania. Even so, three men in a car with Serbian license plates could make for some interesting encounters.

Curious as to how we would be received, we stopped for breakfast, drawing some intense stares from some locals, probably for speaking English, and the attention of a very friendly waiter. A fearful Kosta was dispatched to a bakery to acquire some provisions for the road ahead, returning with pastries and without incident. Any interest in us was simply because we were foreign, not because we were from somewhere in particular.

Crossing the border, Albania was remarkable. Another country that doesn’t exactly have great relations with Serbia, we knew that our car might still draw attention and it was with a little apprehension that we parked for lunch in a large town not far from the Montenegrin border. The Albanians who served us kebabs at Snack Attack, the insanely affordable fast food restaurant in the centre of the beautiful, historic town of Lezhë, were overwhelmingly friendly, intrigued by our journey, and keen to teach us some of their language. Any concerns we had about Kosta and Sasa being Serbian were completely unfounded.

Our destination was Ulcinj in the south of Montenegro. This ancient seaport features the 12-metre-tall ‘Freedom Monument’ which dominates the skyline of one half of the town. It was built in 1985 to commemorate those who died resisting occupation – first by the Italians and then by the Germans – during the Second World War. The structure has never sat too comfortably with the town’s residents; this far south into Montenegro, the population is predominantly historically Albanian and the architectural whims of their former communist rulers have never been particularly well received. The monument might memorialise the city’s liberation, but it also represents the politics of the powers that built it, and many residents would like to see it removed. Invariably, the site is not maintained and attracts a lot of graffiti.

When searching out images online, it was impossible to say whether it would be possible to climb the structure. After spending an hour staring up at it – joined by two locals, Marko and Vučeta, one of whom lived next door – trying various routes and standing on each other’s shoulders, we decided that a rope was required. After a trip into town, another thirty minutes passed before we decided that string was also required, necessitating a second journey. A log was tied to the string which was tied to the rope. The log was thrown, the string pulled, the rope drawn into place and finally we had something to climb. Except that without some knots, the rope was unclimbable. The rope came down. Knots were added. The rope went up.

Two hours after we arrived, Sasa climbed. The weather was changing. It was as he pulled down for the first time that I realised that we were effectively grinding the hemp rope against the two right-angled concrete corners of the monument’s top edges. Under tension, any lateral movement could cut the rope very quickly. Holding our end of the rope, we watched nervously as Sasa (and his badly bruised heel) made his way up.

It was as we grabbed the last of our photographs that the police arrived. Sasa made a quick descent and, for the third time in two days, we braced ourselves for difficult questions and potentially worse. Again, we were caught by surprise; the police had been alerted to what was thought to be a suicide attempt and were relieved and slightly amused to find that we were there simply to do stupid things for some photographs. Happy that we were done with our climbing and not about to end our lives, they went on their way. For us, it was time to pull the rope down, pack the cameras away and head back into town for pizza. 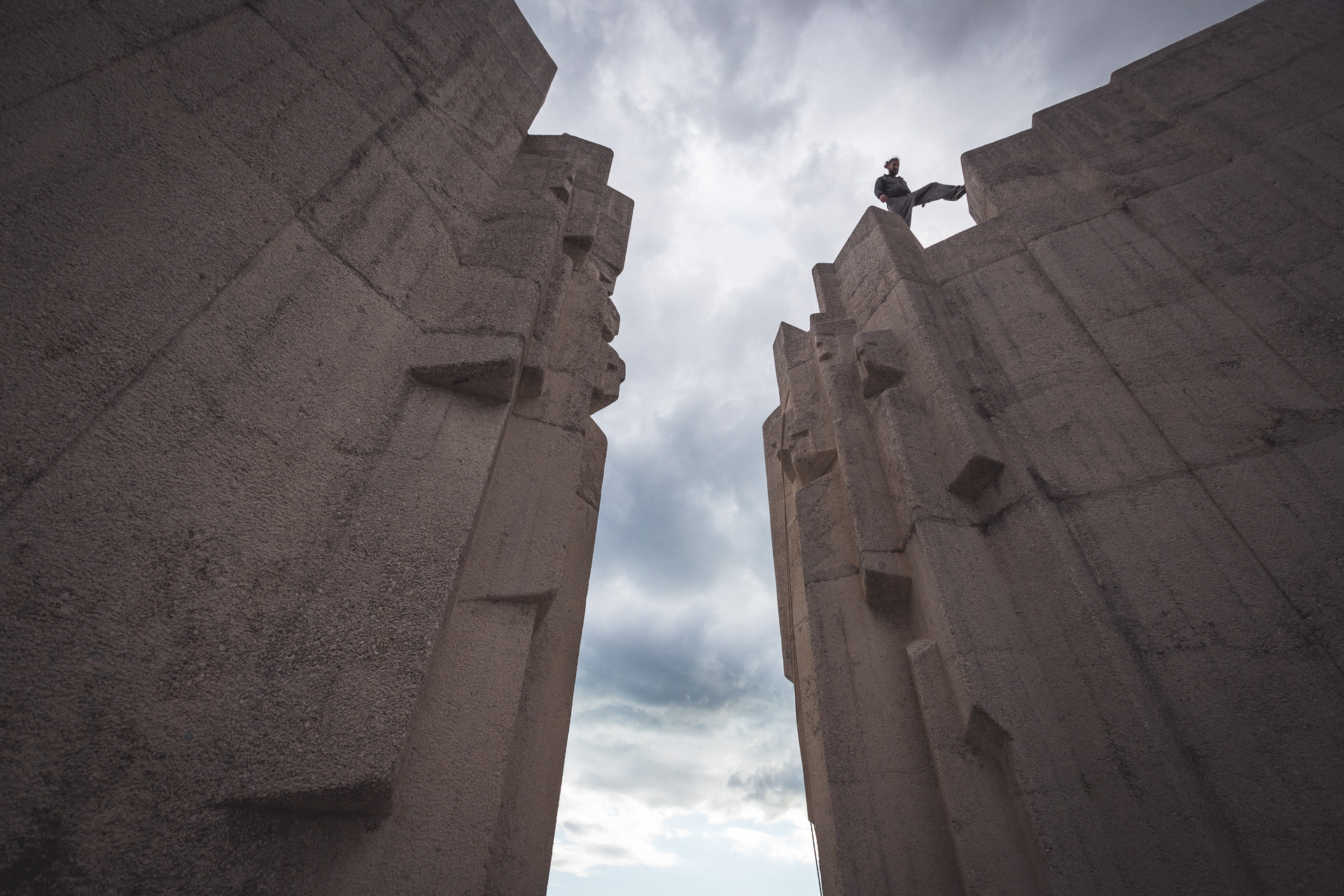