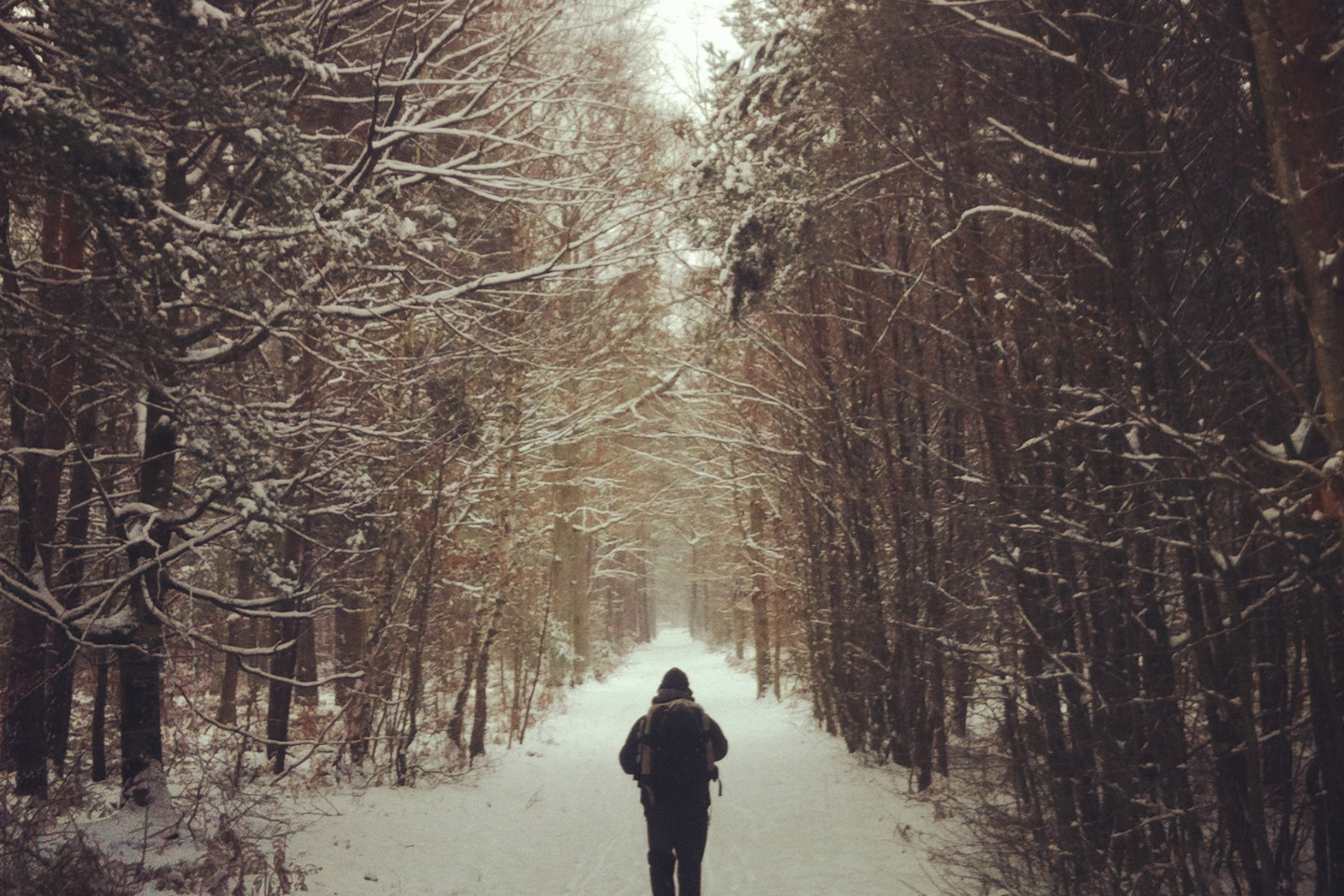 In the last ten years, I think Johnny ‘Sticky Fingers’ Budden has appeared in more of my photographs than any other traceur. Looking back I realise that I’ve been on a fair few adventures with him – running across the rooftops of shopping malls in Nottingham, being paid by a giant Russian multinational to jump around the capital of Nicaragua, exploring a derelict ocean liner, trekking around Paris in the rain to shoot for the cover of a magazine. Of all the people to hook up with and do random things, he’s got to be one of my favourites.

Since completing his epic 1,000 miles of parkour, Johnny has been living in Paris which has made our adventures a little harder to come by. The guy regularly works a 70-80 hour week so even getting a reply to an email can be a struggle. When I spotted Eurostar’s January sale, I didn’t hesitate; I bought the tickets and told Johnny when I’d be arriving, hoping he would reply with his address so I at least had a door to knock on and floor to sleep on.

When I arrived he was in the middle of pitching for an advertising job worth several million euros so I wasn’t even sure if he was going to be able to find time to hang out. There were vague plans for climbing in Fontainebleau or tracking down some old military hospitals in Normandy but both of these ideas had problems; there was a couple of inches of snow on the ground which would make climbing tricky; and we hadn’t done enough research to know where to go for our Normandy explorations. Jokingly I suggested that we try walking the 60km to Fontainebleau, buying a tent and a sleeping bag en route. Somehow Johnny thought this was a great idea. On Saturday morning we set off.

We took the Metro out to the southern outskirts of central Paris and bought a tent. And a sleeping bag for Johnny. And a roll mat, And a gas stove. And a map. And a compass. God bless Decathlon. We were hardly equipped for walking; we were both carrying hold-alls, I had my DSLR and Johnny was wearing trainers. We had an idea that the trek would take about 13-14 hours but this was not taking account of time spent navigating and trudging through 6 inches of snow. I had a vague understanding of a route that took us through the Forest of Senart and across a wide stretch of farmed countryside before reaching Bois-le-Roi on the northern outskirts of the forests of Fontainebleau. On we marched.

After the monotony of the major roads, entering the Forest of Senart felt quite peaceful. There were a handful of other walkers that passed by but we did half hour stints where we didn’t see another person. Despite feeling that we were maintaining a good pace, the snow, the badly-fitted packs and the navigation was slowing us down. After emerging from the forest into farmland it became apparent that our chances of reaching Fontainebleau, finding somewhere to camp and pitching a tent before midnight were looking slim. This was made worse by painful inflammation in my knee, probably a result of walking through snow and having spindly legs, a hold-all on my back and my camera rucksack on my front. 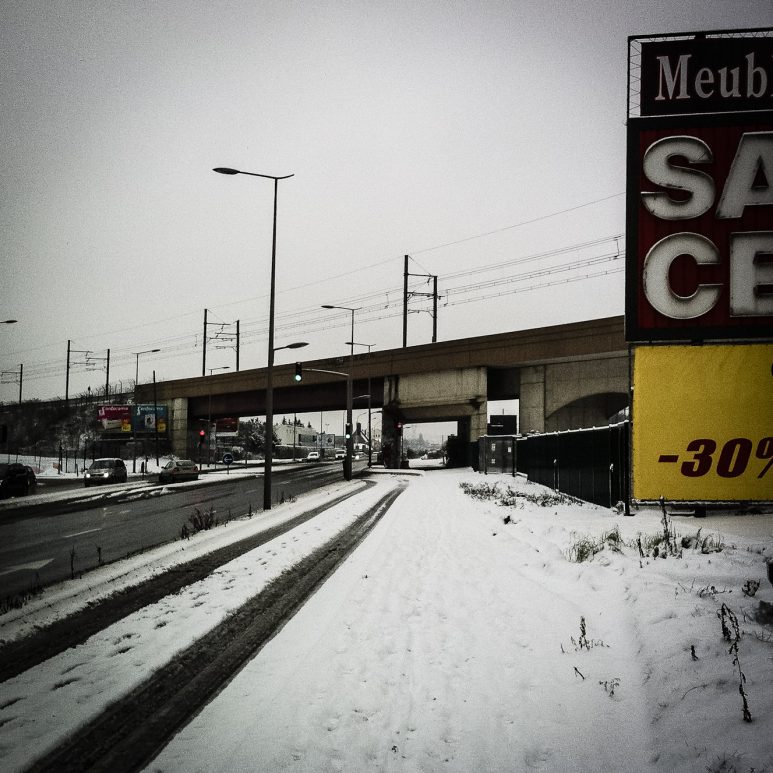 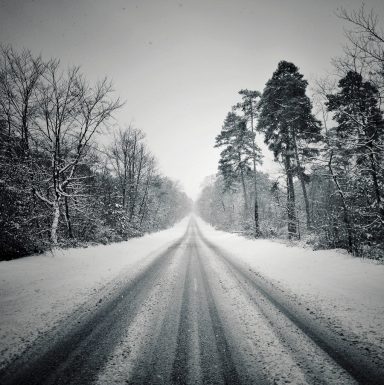 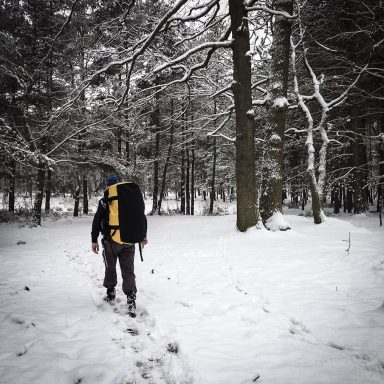 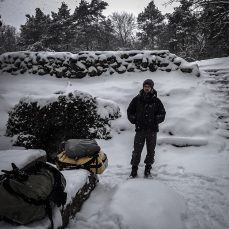 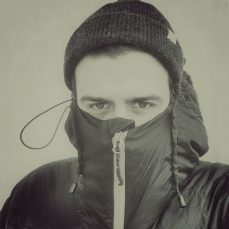 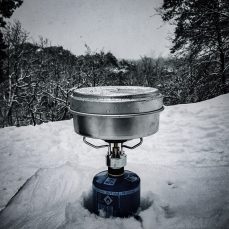 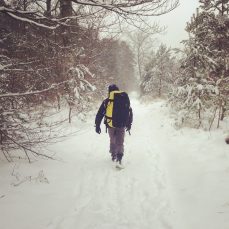 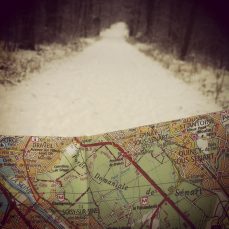 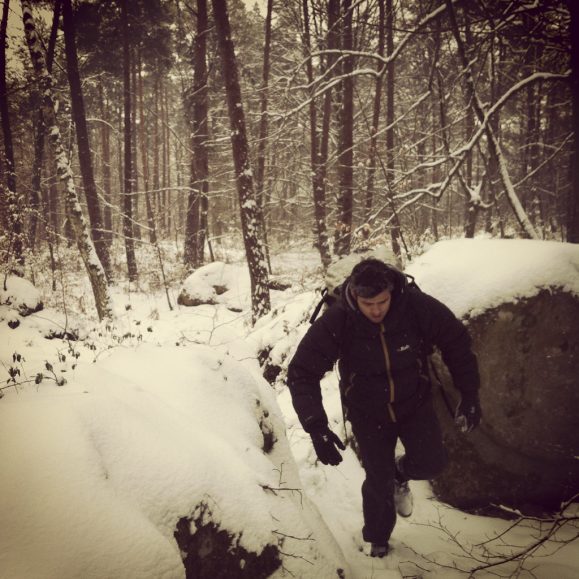 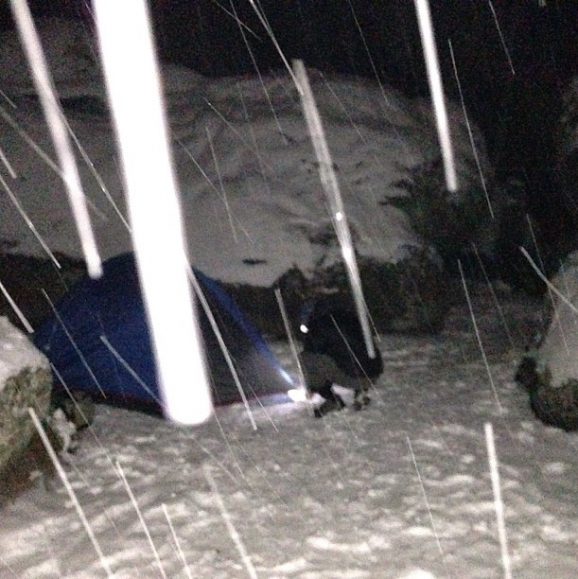 We took a very late lunch in a nearby village and grabbed some supplies. There was a train station a short walk from us and in two stops we would be at Bois-le-Roi. It was dark when we boarded and darker when we got off. The Fontainebleau Forest lay before us and it was a forty minute hike to some rocks where I was hopeful of finding some flat ground and a strong sense of isolation. It was a short, steep ascent to get amongst the boulders and finding a spot in the dark was tough. In addition, Johnny somehow hadn’t brought a torch, we’d not used our brand new tent before and it had been snowing pretty consistently since leaving the train. All part of the fun. 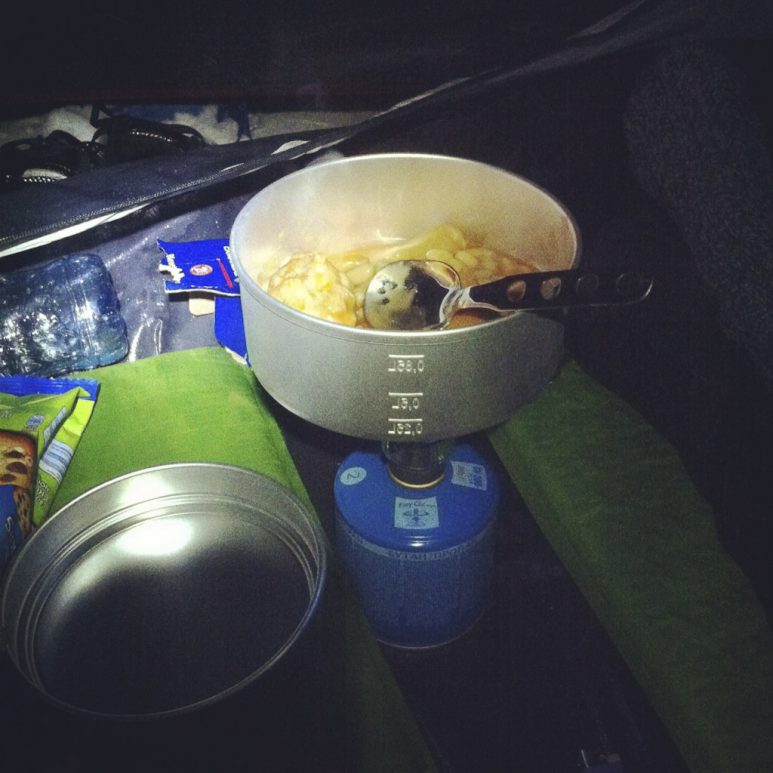 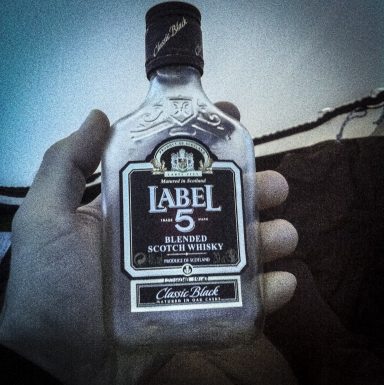 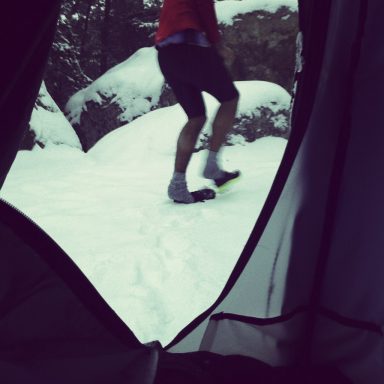 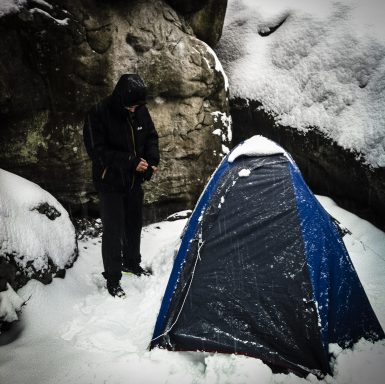 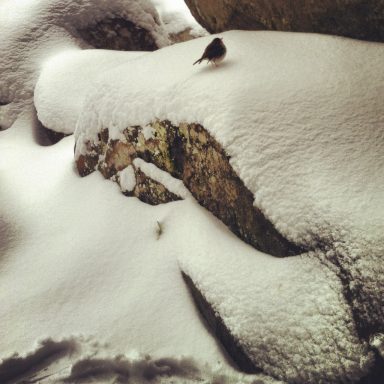 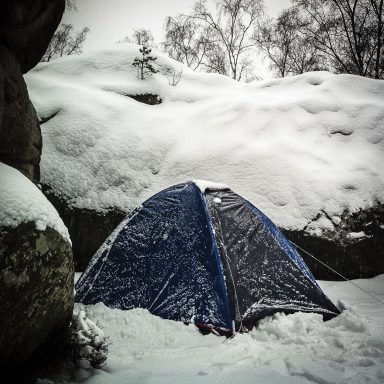 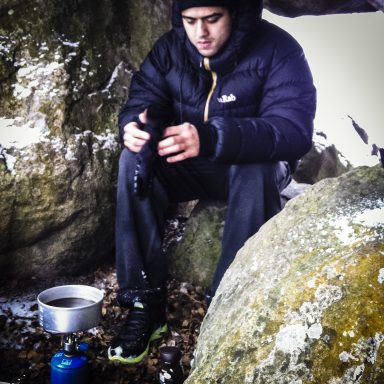 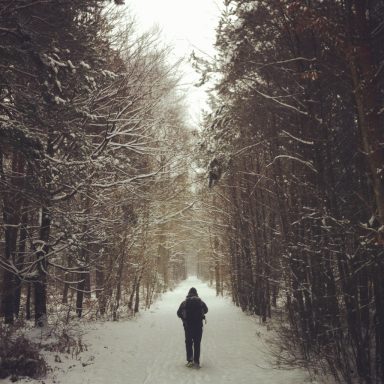 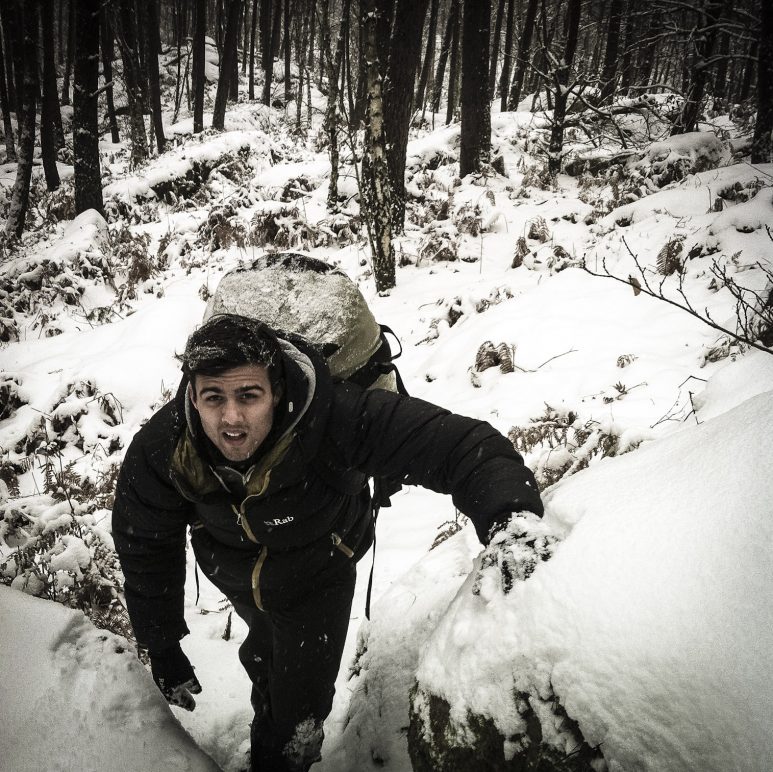 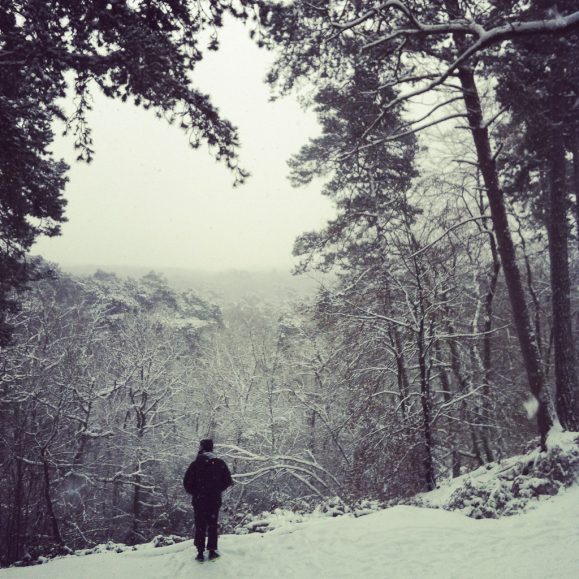 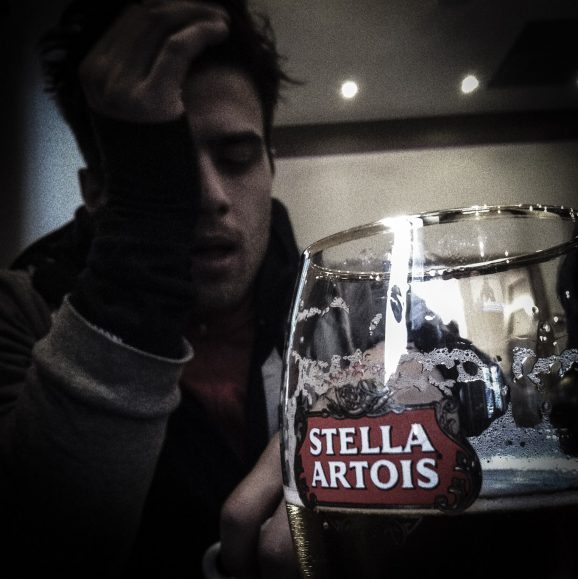 For £25, the tent did an amazing job. We heated our tin of beans, drank whiskey and chatted endlessly, high on the exhilaration of doing something so random and the sense of being far away from everyone else, albeit with phones and bank cards in our pockets. It just goes to show, you don’t need to go far to get a small sense of adventure. This one was right on Johnny’s doorstep.

The following morning, breakfast was instant coffee and a sandwich, sharing some crumbs with a very brave robin. We walked back to the train station with the idea of boarding a train all the way back to Paris and spending a relaxed day in Johnny’s apartment. However, a fine cocktail of paracetamol and ibuprofen was doing its job on my knee and we felt like doing some more walking. We had only seen the snow-laden forests by night and it seemed a shame to head back so early. Instead we weaved a 14km route through the trees, often improvising our route depending on how long it was taking and what looked the most interesting. Flâneurs of the forest.

Warm and damp on our train back to Paris, we dozed and hoped that our next mini-adventure wasn’t too far away.