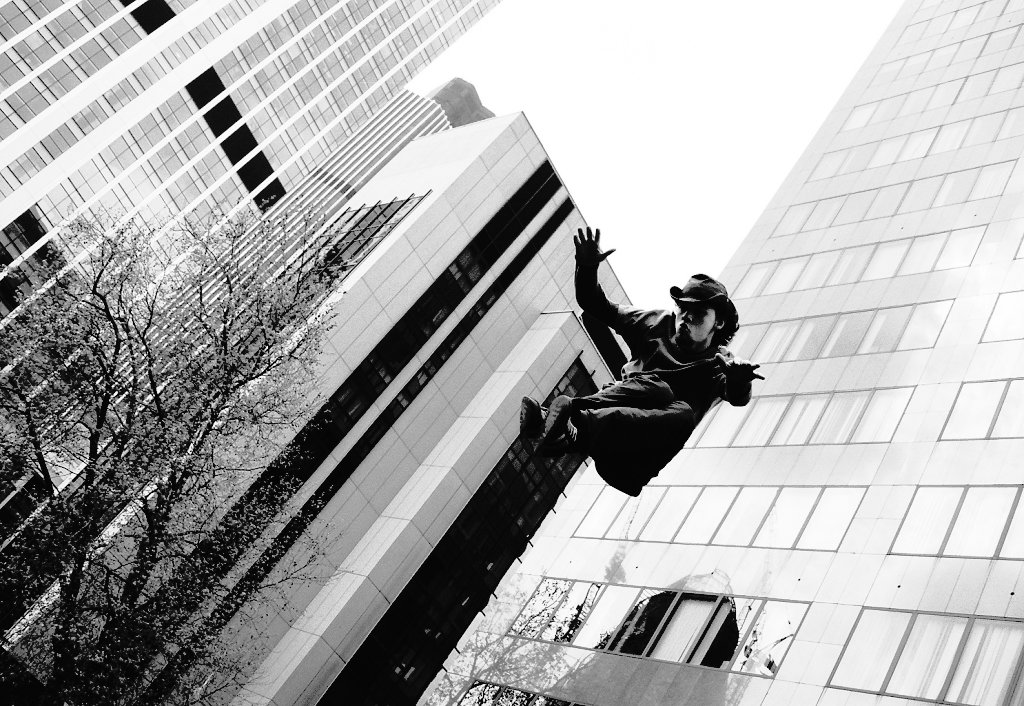 On Sunday 20th April 2003, I drove to London to meet up with a random collection of people who were gathering to train at PK3, the third ever gathering of traceurs in the UK.

At this stage of its evolution, parkour had not entered mainstream consciousness. I stumbled upon it randomly on late night cable tv and wondered if it might be worth investigating as part of a research paper for a Master’s degree that, thanks to parkour, I never finished. I started searching online, finding a handful of badly compressed videos (this was long before YouTube) from the Parisian suburbs and a couple of French-speaking forums. Eventually I came across Urban Freeflow, the only English language website at the time and whose forum served as the main means of communication between fledgling UK practitioners. 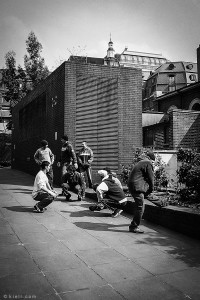 Facebook and Twitter were still several years away and it was normal to use a nickname when posting on internet forums, both to protect one’s identity and to create an online persona. Soon enough, as Kiell, I was chatting regularly with ez, Kerbie, Asid, Cable, Bam and many others. (To this day many people in the parkour world still call me by my nickname.) The group were planning to meet and I asked if I could come along in order to interview them and watch them train. It made sense to take my SLR camera along as part of my research, despite not really knowing how to use it. Blue Devil was living in Redditch and I arranged to pick him up en route from Birmingham.

The group of around twelve gathered outside the McDonald’s at Liverpool Street station. Meeting a number of strangers and knowing them only by their internet handles was a curious experience. All young men aged between 14 and 35, it was an odd mixture of people. Many were athletic with backgrounds in martial arts and breakdancing. Others were less sporty but drawn to parkour through what they saw as its subversive tendencies. I think these guys left after an hour or two, possibly a little disappointed that it was not quite the anarchy that they had envisioned.

After introductions we wandered a short distance to the back of St Botolph-Without-Bishopsgate, a small, church that only just survived the Great Fire of London in 1666. In the shadow of a shiny, city office block we warmed up, making use of the rails and low walls. This was also the site of what was dubbed ‘The Leap of Faith’ by the community, a gap between sections of roof connecting part of the church with the office block’s large air conditioning enclosures. 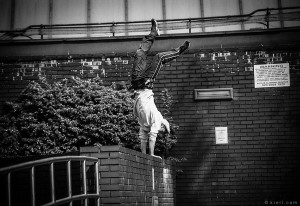 For the most part, the jumps weren’t pretty or skilful. Our understanding of what constituted parkour was extremely limited. Attempts by the Urban Freeflow community at contacting the French to gain insights were few in number and largely unsuccessful. The language barrier didn’t help and I can understand the apparent French disdain for what was happening in the UK; we were taking something of theirs and making it our own. Our limited knowledge and skill made our appropriation even more objectionable, building on a natural, pre-existing protectiveness amongst the French practitioners.

Being Sunday, the City was quiet and we drew little attention. In the coming years people would realise that housing estates offer much better terrain than the city centre, and much less chance of encountering security guards and the police.

After lots of rocket vaults and rollerblade-style grab jumps, attention shifted to another rooftop, this time much higher, much more visible. We later realised that it forms part of Liverpool Street Station, one of London’s busiest public transport hubs. I stayed on the church, switching to a longer lens as I wasn’t sure of my abilities to keep up. It proved a prudent choice as, suddenly, police arrived on the rooftop and everyone made a run for it, dropping back down to street level using what was possibly the only bit of parkour that took place that day.

Attempting to shake off some police attention we made our way to The Barbican, its coarse walls and courtyards offering a couple of jumps and vaults. My memory is vague but I think we returned to Liverpool Street a few hours later, prompting a quick visit from the police who were justifiably concerned about gangs of youths climbing onto rooftops. The day came to an end eating chocolate and relaxing on the roof of the church as the sun dropped.

So many aspects of parkour and its community has changed since then. A supremely talented global scene exists, both hugely fragmented but, in some respects, also united and always progressing in ways that one would not think possible. I never envisioned that ten years later I would be living in London with a life that is almost completely dominated by the sport.

To all of those that were present at PK3 – ez, Bam, asid, Hasan, Kerbie, D-Man, Cable, Blake, Skin and Blue Devil – thank you. It was an incredible introduction.